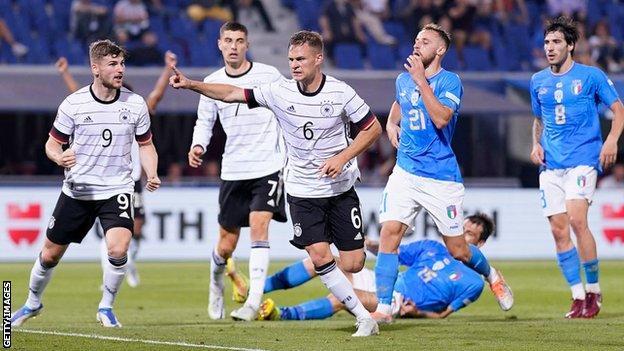 An inexperienced Italy began their rebuilding job with an impressive home draw with Germany in a Nations League opener for both sides.

Having failed to qualify for this year's World Cup in Qatar, Italy opted to test out numerous raw players.

One of them, 18-year-old substitute Wilfried Gnonto, set up Lorenzo Pellegrini for a 70th-minute goal.

Germany levelled immediately, with Joshua Kimmich firing in to make it 10 games unbeaten under Hansi Flick.

Germany's next game in Group A3 is a home match against England, who were beaten 1-0 in Hungary earlier on Saturday. Italy host the Hungarians, with both games on 7 June.

It has been a chastening few months for European champions Italy but, from the wreckage of their shock failure to qualify for the World Cup in Qatar later this year, green shoots are beginning to break through.

The side fielded against Germany was shorn of almost all the names recognisable to the majority of fans outside Italy, with 23-year-old goalkeeper Gianluigi Donnarumma the most experienced player with 44 caps.

But in Inter Milan defender Alessandro Bastoni and Sassuolo pair Davide Frattesi and Gianluca Scamacca they have raw gems to polish.

The display was far from fluent, especially in an understandably nervy opening 10 minutes, but full of endeavour from a group that grew into the contest and even had the temerity to take the lead.

The source of their opener was livewire teenage forward Gnonto. He began his career at Inter Milan, impressed Roberto Mancini with his displays at FC Zurich in Switzerland last season, and lifted the crowd with his direct run and fine cross for Pellegrini to poke in.

Had the lead lasted longer than three minutes, Italy could well have been celebrating victory, but their inexperience showed as they switched off in the aftermath of their goal and allowed a wily German side to respond.

Jonas Hoffman's cross fell to Kimmich in the box and he could not miss.

Flick is unlikely to have learned anything he did not already know about his established side, but he will have been pleased to witness their ability to dig deep when needed to get a result.

For Germany it is all about fine-tuning for Qatar. For Italy it is about seeing beyond the end of this year and to major tournament qualification campaigns to come. This was a decent start.

This news item was provided by the BBC Sport - Football website - the original link is: https://www.bbc.co.uk/sport/football/61691396?at_medium=RSS&at_campaign=KARANGA