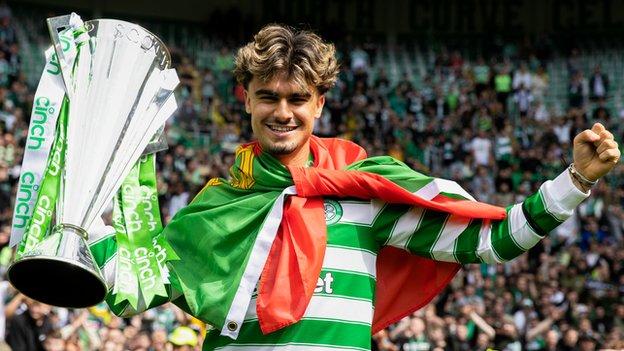 Jota has become a favourite with the Celtic support

Jota has formalised a five-year switch to Celtic after spending last season on loan from Benfica.

An undisclosed fee had been agreed when the winger initially moved to Glasgow.

The Portuguese scored 13 goals and provided 14 assists in 40 appearances as Ange Postecoglou's side won the Scottish Premiership and League Cup.

"With the season that we had with all the winning and all the trophies, I think it was very good for everyone," said the 23-year-old.

"It was a great experience. I already knew, more or less, how big Celtic was but I think people only realise once you are inside the club and inside the structure.

"I got to know the club in another perspective, and I just fell in love. So I think it's a good time to be here and I just want to develop."

Jota had been loaned to Real Valladolid for the 2020-21 season and has been capped up to under-21 level by his country.

"It's a tremendous step in my career," he added on Celtic TV.

"I'm really happy to have joined Celtic and I just want to give some joy to the fans, to our team and conquer as many things as we can."

This news item was provided by the BBC Sport - Football website - the original link is: https://www.bbc.co.uk/sport/football/61620574?at_medium=RSS&at_campaign=KARANGA