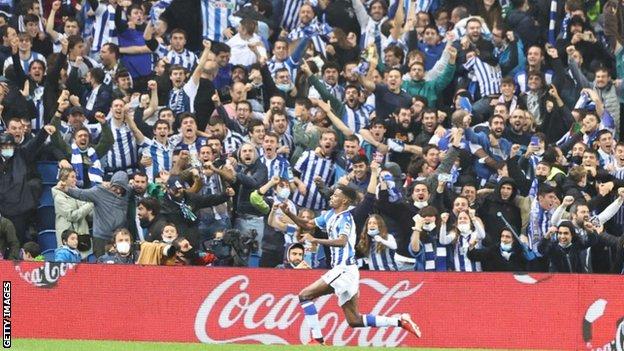 Real Sociedad have not won a league title in 40 years but any talk suggesting that could change this season will not be entertained at the Basque club's Zubieta training base. At least not yet.

La Real sit second in a wide-open La Liga after 14 games and have not lost since the opening day of the season against Barcelona. They have flirted with top spot but a goalless draw against Valencia allowed Real Madrid to take pole position. For now.

Alexander Isak is the exciting striker who is leading the line in San Sebastian - while also trying his best to keep La Real fans grounded.

"First place now doesn't mean anything. The only thing that makes us happy is just winning games. That's fun - it is not fun to be first place if you don't end up there."

La Real missed out on Champions League qualification last season but are well placed to reach the Europa League knockout stages and face Group B leaders Monaco on Thursday.

The club's improvement in recent seasons has coincided with Isak's growing influence in the team.

This season the forward, who suffered a hamstring injury in September, has not been on the losing side in any of the 14 games he has played, scoring five times in all competitions.

"I have had two very good years not only on the pitch but also outside it," he says. "I feel very good in this city, in this country and I am very happy to be here."

The 22-year-old has been touted for big things since breaking into the AIK side aged 16, inevitably sparking comparisons with legendary countryman Zlatan Ibrahimovic.

Isak sees himself as a different player to the Sweden icon but they talk a lot about positioning and movement while on international duty.

A move to Borussia Dortmund did not work out but Isak is realising his potential at Reale Arena, somewhere he feels at home.

"It is a mix of being in a country where football fits my qualities and being at a club that really believes in me and bought me with the intention of making me a top player," he adds.

"Spanish football benefits me more because I am a player who likes to touch the ball and combine with my team-mates. In Spain there is more playing, I wouldn't say tiki-taka, but more playing with the ball and it is more technical." 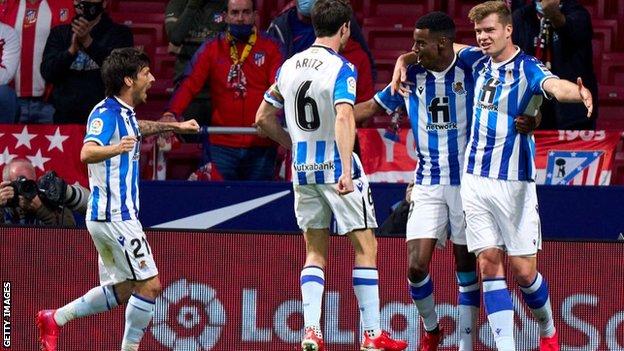 La Real continue to benefit from producing their own talented youngsters in the club's famed Zubieta academy and have complemented those homegrown stars with smart acquisitions - one being Isak, another being former Manchester City playmaker David Silva.

The 35-year-old, who joined on a free transfer last year, has featured regularly this term and is someone Isak is keen to learn from.

"I wouldn't say he surprised me because I think we all knew the level he had and what he could provide for the team," he explains.

"It is really nice to see the way he works and how professional he is with the team. He is very down to earth, so all of us can learn a lot from a player like that."

Norway forward Alexander Sorloth has been brought in on loan from RB Leipzig to help ease the burden on Isak and is another who says the squad has benefited from Silva's presence.

"He sets an example," says Sorloth. "In his work and in his games you can see he is so calm on the ball all the time, it is like he has all the time in the world, especially in tight spaces.

"For me it has been really good to see his work ethic - he still looks hungry."

"He is really good at keeping us grounded, he doesn't want to look too far ahead," he says. "His intensity on the training ground is really good. That affects us in the games as well - it always keeps us on our toes."

Now the former Crystal Palace striker wants the club to use their Copa del Rey victory as a platform to build on and achieve further success, and perhaps that first title since 1981-82.

"We have seen other teams that when you win a trophy, the whole squad and the whole club sees that is possible, it adds motivation to the club and hunger," he adds.

"The club gets better, more motivated, gets better players, so it can be the start of something. It is important to not look too far ahead but everyone has noticed it [La Liga] is more open."

This news item was provided by the BBC Sport - Football website - the original link is: https://www.bbc.co.uk/sport/football/59347537?at_medium=RSS&at_campaign=KARANGA