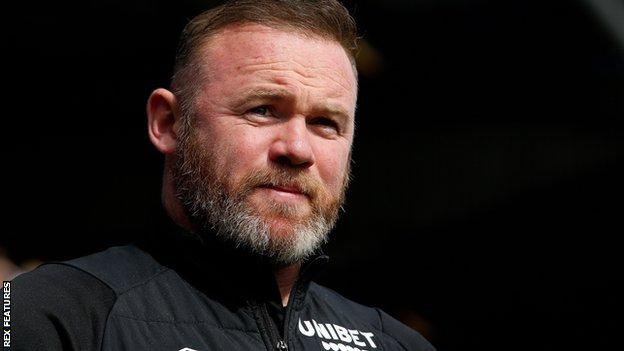 In a career that has seen Derby boss Wayne Rooney become England's record goalscorer and win five Premier League, his side's opening day clash against Oxford United will be his first-ever taste of League One football

Financially struggling Derby County's first League One game in 36 years will be at home to Oxford United on 30 July.

Derby, who are in administration, were relegated after having been docked a total of 21 points for finance issues.

Fellow promoted side Exeter City begin their first third-tier campaign since relegation in 2012 with a long trip to Lincoln City, while League Two play-off winners Port Vale are at home to Fleetwood Town.

How will financially stricken Derby cope? 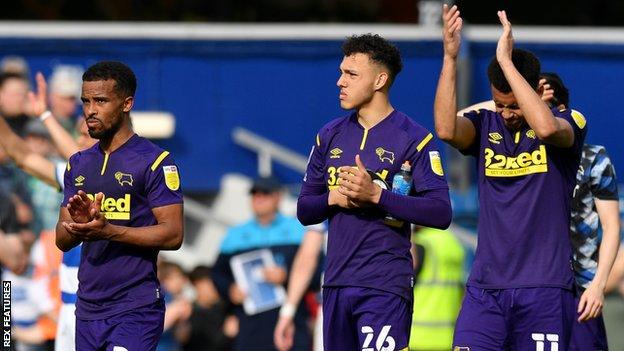 Derby are set to start pre-season on Monday with just five players under contract for the 2022-23 season and options for one-year extensions on two more.

The club remain in administration and under a transfer embargo, meaning manager Wayne Rooney is unable to bring in any new players at the moment and unsure as to what sort of a squad he could build.

Should a takeover not happen - American businessman Chris Kirchner's planned deal fell apart earlier this month - the Rams' administrators could be forced to sell some or all of the five players - Krystian Bielik, Max Bird, Jason Knight, Louie Sibley and Jack Stretton - in order to keep the business afloat.

The Rams opening day trip to Oxford United also has a historical tie-in as the two clubs were both previously owned by media baron Robert Maxwell in the 1980's.

There is recent precedent for financially troubled sides starting a League One season - and for Derby fans they do not make pleasant reading.

Bury were expelled from the EFL in 2019 without kicking a ball after the club was liquidated, while Bolton ended bottom of the table having started the season in administration.

A Trotters side made up largely of youth players conceded 23 goals in their first six league games of the 2019-20 season and had a game called off due to welfare concerns over their young squad.

Bolton were eventually taken over, but not before finishing bottom and being relegated to League Two after losing 18 of the 34 games they had played before the Covid-19 pandemic ended the season.

Rams fan will not want a repeat of either situation, but a Bolton scenario would understandably be more palatable than the fate that befell Bury. 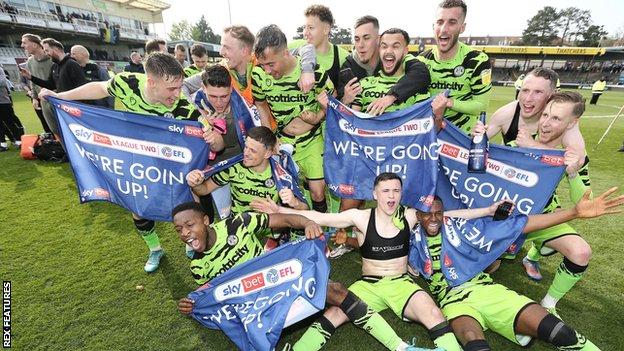 Forest Green's home town of Nailsworth in Gloucestershire will become the smallest place to host third-tier football, with a population of less that 6,000 according to the 2011 census

As opening-day away trips go, Forest Green Rovers fans could not have asked for much more than a 30-mile journey south to Bristol Rovers.

Forest Green - who had never played in the EFL until 2017 - play a first third-tier game in their history with a new head coach in Ian Burchnall following Rob Edwards' move to Watford.

Exeter, who were pipped to the second-tier title on a dramatic final day that saw Bristol Rovers win automatic promotion after a 7-0 win at relegated Scunthorpe United, will face a trip to Devon rivals Plymouth Argyle on 29 October for a first derby game in three years.

With seven sides in the division having played Premier League football at some point over the past 30 years, it is no surprise that there are two opening day matches that you may have expected to see on Match of the Day a few years ago.

Sheffield Wednesday start a second campaign in League One at home to 2008 FA Cup winners Portsmouth, while Ipswich Town play host to Bolton at Portman Road.

This news item was provided by the BBC Sport - Football website - the original link is: https://www.bbc.co.uk/sport/football/61895945?at_medium=RSS&at_campaign=KARANGA