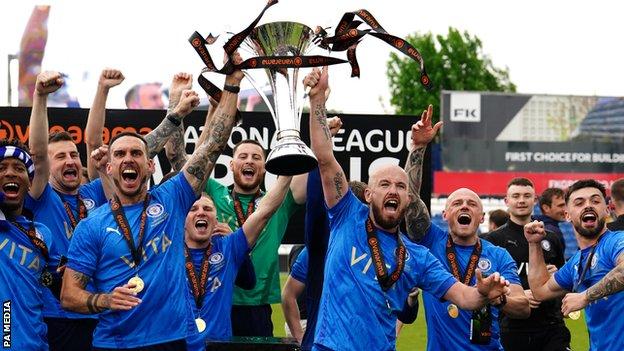 Stockport County start life back in the EFL with a home match against Barrow in League Two.

Fellow promoted side Grimsby visit Leyton Orient after going up out of the National League at the first attempt.

The season will begin on Saturday, 30 July.

Like League One, the fourth tier will continue as normal during the World Cup in Qatar through November and December.

Elsewhere on the opening day, Mark Hughes' Bradford welcome Yorkshire rivals Doncaster, who were relegated from League One last season.

Two of 2021-22's relegated sides face off as AFC Wimbledon play host to Gillingham, while Crewe, the fourth side to drop into League Two, visit Rochdale.

Stockport eventually claimed the National League title by six points from second-placed Wrexham, although they had gone into the final day still needing a point to be sure of promotion.

Their rise was vindication for boss Dave Challinor who took Hartlepool up to the EFL through the play-offs in 2020-21 but left for the Hatters job in November.

Their 11-year spell outside the EFL had seen them drop into National League North for six seasons and even briefly go part-time but they are now looking up once again.

Grimsby's rise out of non-league was quicker but certainly still dramatic.

The Mariners finished sixth in the regular season, meaning they had to play both of their play-off matches away from home.

They then claimed a 2-1 extra-time win at Notts County before triumphing 5-4 at Wrexham thanks to a 119th-minute winning goal and completed their hat-trick by beating Solihull in extra-time in the final. 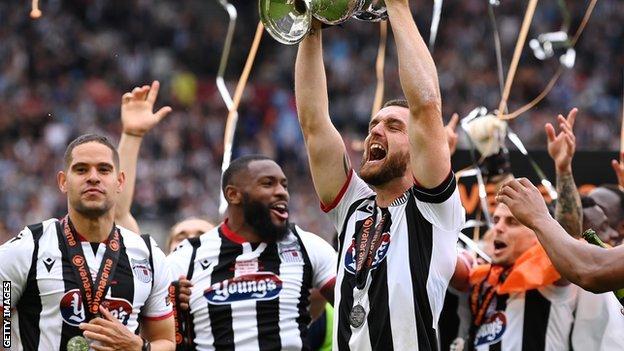 What becomes of the broken hearted?

Northampton missed out on automatic promotion in stunning circumstances on the final day of last season.

The Cobblers, who had started the day in third, beat Barrow 3-1 but Bristol Rovers' incredible 7-0 win over lowly Scunthorpe meant they finished fourth on goals scored.

Jon Brady's team were then beaten over two-legs in the play-offs by Mansfield.

The Stags had totally turned their season around after a disastrous start to ultimately finish in seventh place under Nigel Clough.

However, they were outclassed in the final by Port Vale and fell to a 3-0 defeat, having played the majority of the game with 10 men.

Both teams will hope to have gotten over those disappointments when the season kicks off at the end of next month.

This news item was provided by the BBC Sport - Football website - the original link is: https://www.bbc.co.uk/sport/football/61907243?at_medium=RSS&at_campaign=KARANGA