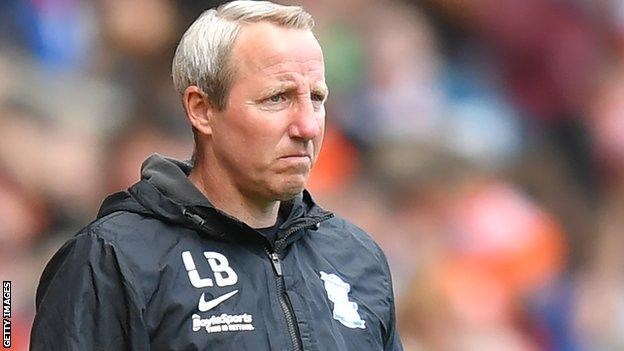 Blues finished 20th in the Championship table last season, having won just four times in 26 league games after the end of November.

They would have finished lower but for relegated Derby's 21-point deduction.

"The board of directors believe this to be the necessary course of action and have acted swiftly ahead of the 2022-23 campaign," read a Blues statement.

"A replacement head coach and support staff will be confirmed in due course."

Former Blues midfielder Bowyer left Charlton to take the helm at St Andrew's in March 2021 on a two-and-a-half-year deal when City were three points above the relegation zone.

He eventually led Blues to an 18th-place finish in 2020-21. But, after a promising start last season, when they won three of their first six games to sit fourth in the table, they fell badly away.

Bowyer's side, still distracted by internal issues, won just eight more times in 40 games - and picked up just two points from their last six matches, shipping 17 goals in the process.

Bowyer's replacement will be the ninth manager City's owners Birmingham Sports Holdings Ltd have appointed since they took control of the club as Trillion Trophy Asia in October 2016.

The Blues statement added: "The board would like to place on record their sincere thanks to Lee for all of his efforts during his time at the club.

"Lee's commitment and dedication was never in question. He will always be welcomed back to St Andrew's."

Lee Bowyer's position at St Andrew's had seemed more or less untenable since the 6-1 Easter Monday defeat at Blackpool, the low point of a season-ending run of one win in 10 Championship games. Indeed he gave the distinct impression after the match that he did not expect to be in charge for the following game at home to Millwall.

The delay in the decision-making process is almost certainly linked to the intense speculation over a takeover at Birmingham, news that broke in the build-up to the final fixture at home to Blackburn.

With unpopular owners Birmingham Sports Holdings seemingly willing to listen to offers from at least two rival bidders, there became an apparent reluctance to sign off on any significant expenditure. Projects including the repair and potential reopening of the lower tiers of the Kop and Tilton Road Stands have been delayed.

Now, two weeks into pre-season, Bowyer and goalkeeping coach Andy Marshall have left the club. Assistant Mark Kennedy was already gone, taking over at Lincoln City. Significantly, he had not been replaced.

A Carling Cup-winning hero in his playing days, Bowyer started extremely well at St Andrew's when he returned as head coach.

Given 10 games to save their Championship future in March 2021, he achieved it with two games to spare. He restored the club's hard-working, blue collar style of play to great effect.

But after a bright start to his first full season in charge, his squad tailed off badly, making his departure unsurprising but curious in its timing.

This news item was provided by the BBC Sport - Football website - the original link is: https://www.bbc.co.uk/sport/football/61144145?at_medium=RSS&at_campaign=KARANGA