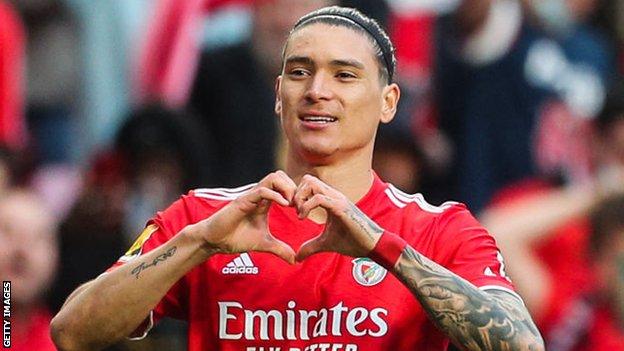 The deal is expected to be worth an initial £64m with about £21m in add-ons.

Nunez, 22, scored 34 times in 41 appearances across all competitions for Benfica last season.

He also scored twice against Liverpool as Benfica were beaten 6-4 across two legs by the Reds in the Champions League quarter-finals.

After their second meeting, Liverpool boss Jurgen Klopp predicted Nunez had "a big career ahead of him", describing him as "physically strong, quick, [and] calm around his finish".

A medical has yet to take place but it is believed Liverpool sporting director Julian Ward was in Portugal over the weekend to hold talks.

Premier League rivals Manchester United were reportedly also interested in signing Nunez, who cost Benfica 24m euros (£20.5m) when he signed from Spanish side Almeria in 2020.

Liverpool's record transfer is the £75m paid for centre-back Virgil van Dijk following his transfer from Southampton in 2018 - and the deal for Nunez could surpass that depending on the amount of the add-ons.

The forward scored six times in 10 Champions League games for Benfica last term, while he managed 26 goals and four assists in 28 league matches.

Nunez's expected arrival could see him replace Sadio Mane, who is in the final year of his contract with Liverpool and is attracting the interest of Bayern Munich.

The Reds have rejected a deal worth £30m from the German champions for the 30-year-old Senegal forward.

The club's 27-year-old Japan international Takumi Minamino is also attracting the interest of a number of clubs.

This news item was provided by the BBC Sport - Football website - the original link is: https://www.bbc.co.uk/sport/football/61776038?at_medium=RSS&at_campaign=KARANGA