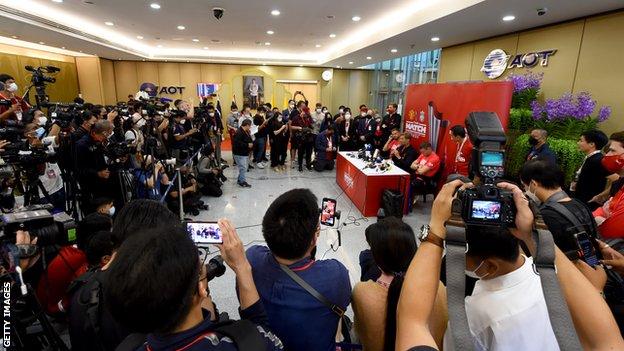 There were chaotic scenes at Liverpool's press conference on Sunday

Liverpool manager Jurgen Klopp could not resist a comparison as he tried to take in a typically enthusiastic Thai welcome.

"Was it like this yesterday when Manchester United came?" he asked.

There is something unique about the reception England's biggest clubs get when they visit the Far East.

Some waited more than six hours for Liverpool's arrival. Two hours before their flight was due to land, hundreds were waiting outside Bangkok Airport.

Liverpool landed in Thailand on Sunday, a day after Premier League rivals Manchester United. The two sides play each other on Tuesday before travelling to Australia for more pre-season matches.

By the time Klopp and his players were ready to leave the airport and be driven into the city, there were well over a thousand fans present.

Some were 50 yards away and probably didn't even get the merest glimpse of their heroes, given it only needed about three strides to get from the exit of the VIP room to the team bus.

Others stood in the central reservation to wave Liverpool off, the noise from the main body of supporters following them as they left.

Half an hour before, Klopp had led his players in honouring their Thai hosts in the traditional welcome ceremony.

If that was orderly, the scene soon became chaotic as a press conference table was set up, with three seats - for Klopp, skipper Jordan Henderson and vice-captain James Milner.

The barrier that was supposed to be for media to stay behind was ignored and officials attempted in vain to clear space for questions to be asked in an orderly fashion. They had no chance, which is when Klopp asked for the comparison with Manchester United.

"I have never been to a press conference like this," he said as he was presented with a ball.

"Thank you for the really warm welcome. It is only my second time in Thailand, the first was an hour on the way to Sydney. Hopefully I get time to spend in the city this time."

Milner spoke about the 'energy' of the fans, while Klopp explained there is no such thing as a friendly between Liverpool and United.

If today's events are any guide, it should be a raucous atmosphere at the Rajamangala Stadium on Tuesday. 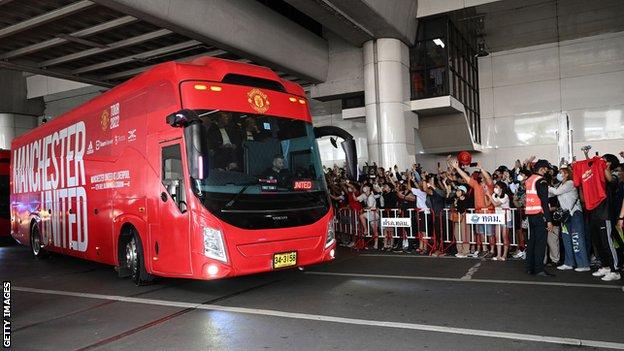 This news item was provided by the BBC Sport - Football website - the original link is: https://www.bbc.co.uk/sport/football/62112499?at_medium=RSS&at_campaign=KARANGA