Liverpool: Why Premier League title defence will be far from straightforward

It took Liverpool 30 long, painful years to win a 19th top-flight league title. They now face a tough eight-month examination to see if they can defend it.

There are a number of reasons why the Reds' attempt to win back-to-back Premier League crowns is fraught with difficulty.

BBC Sport picks through them...

One successful defence in a decade

BBC Sport did a whole piece on this very subject in August 2018, digging in to all the reasons why a side had not, until then, retained the top-flight trophy since 2009.

Manchester City would subsequently do just that in the following season, but the points contained in the article remain valid.

Defending champions have been regularly outspent in recent seasons, while investing poorly themselves. They have also experienced other sides stepping up to the challenge of facing the champions while they themselves lose an edge, and have struggled to successfully juggle European and domestic challenges.

Liverpool have done a pretty decent job of satisfying the demands of both the Champions League and Premier League of late, but have no recent experience of being the hunted in the latter.

It is also worth noting that then defending champions City outspent challengers Liverpool to a huge degree last summer. And Jurgen Klopp's side have been quiet again so far this off season...

It is often said that you should strengthen from a position of power and Liverpool have never been as strong during the Premier League era as they are now.

The Reds could yet splash out on further talent, with this transfer window open until 5 October. But so far, their only bit of business is bringing in Kostas Tsimikas for £11.7m to provide cover and competition for Andy Robertson at left-back.

Having won the title by a whopping 18 points, Liverpool are fully entitled to place faith in their existing squad, of which only reserve goalkeeper Adrian and midfielders Jordan Henderson and James Milner are over 30. Their main rivals, though, are spending big to try to bridge the gap. 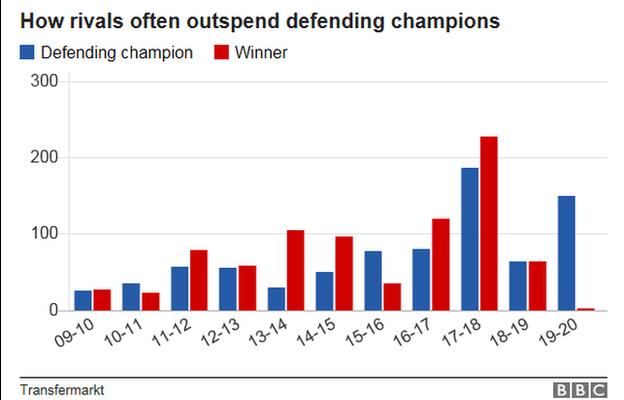 Manchester City, champions for the two seasons before Liverpool's win and runners-up to the Reds in 2019-20, have spent £60m already to address areas of weakness, bringing in centre-back Nathan Ake and winger Ferran Torres, as a replacement for the departed Leroy Sane.

They recruited winger Hakim Ziyech and forward Timo Werner for a combined fee in the region of £80m before last season was even finished, have since signed England left-back Ben Chilwell, centre-backs Malang Sarr and Thiago Silva, and went even bigger with the £71m capture of highly-rated German striker Kai Havertz. Their overall outlay is expected to surpass £200m.

A full and vociferous Anfield is heralded as a particularly big advantage to Liverpool.

Under Klopp, Liverpool have taken full advantage of their ground - they are unbeaten there in 59 Premier League matches, dropping just 20 of a possible 177 points during that run.

However, post-lockdown there were signs that an empty Anfield is less of a spur to the Reds and possibly not as daunting for opponents.

Chelsea went toe to toe with them, Aston Villa were beaten but pushed the newly crowned champions hard, while Burnley snatched a point during the season's delayed run-in.

Liverpool's post-lockdown form in general was a noticeable drop-off on their untouchable efforts before the season's suspension.

There are a number of possible reasons for this, not least of all a potential easing off the accelerator from a side that had just been crowned champions, but none of these will wash with Klopp, even more so if they continue to affect the side in 2020-21.

Yes, we're going to discuss 'expected goals' (xG), which has developed into something of a red rag to fans, some of whom question the importance placed on it as a metric for analysing the game.

It certainly has its limitations, but equally it is also useful as a means of questioning the veracity of a result.

It's important to note at this juncture that Liverpool's Premier League title win last season was fully deserved. Klopp's side were far and away the best side in the division.

What xG shows, though, is that they potentially exceeded expectation, while some of the opponents - Manchester City in particular - underperformed on the metric.

Such an anomaly is not unusual. Great sides are just so because of the elite finishing and defending that enables them to outperform their underlying statistics. It could also be that Liverpool have things going on within their team that are beyond the capabilities of the xG model to capture.

However, xG does suggest that the gap between the Reds and their nearest rivals may not be as big as last season's point totals would have us believe.

This news item was provided by the BBC Sport - Football website - the original link is: http://www.bbc.co.uk/sport/football/53917751