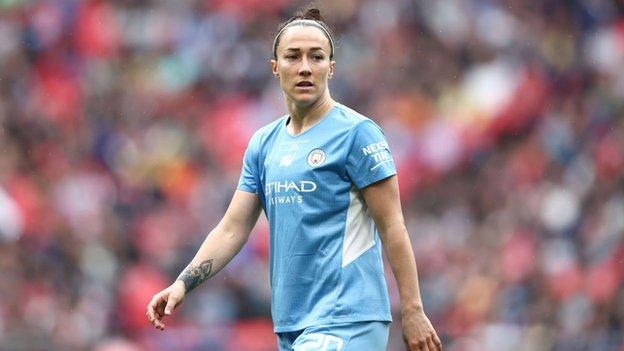 England defender Lucy Bronze has signed for Barcelona on a two-year deal.

In May, Manchester City announced the 30-year-old would leave the club when her deal expired on 30 June.

The 2020 Best Fifa Women's Player rejoined City for a second spell in September 2020 after three years with Lyon.

"I'm very happy to play for a club like FC Barcelona, one of the biggest teams in the world. I really want to start working with the team," Bronze said.

"After a couple of conversations, you can't say no to Barca."

Barcelona are the current champions of Spain's Primera Division and were Champions League runners-up to Lyon last season.

Bronze had been linked with a move to the USA, with Real Madrid also showing interest.

She won five major trophies with City, with two of those arriving in her second spell with the club, and made a total of 111 appearances, scoring 14 goals.

It is Bronze's second move abroad after she left City for Lyon in 2017, where she won three consecutive Champions League titles.

Bronze was tight-lipped over her future when asked this month and she was heavily linked with a move to America.

However, the season in America is already under way and Bronze is currently in training for the European Championship, which starts on 6 July in England.

She could still end up in the US in the future, but this move to Barcelona is a significant one as Bronze and the club will look to return to winning ways in the Champions League.

Bronze enjoyed success in that competition while at Lyon, winning three European titles, but did not go beyond the quarter-final stage with Manchester City.

This news item was provided by the BBC Sport - Football website - the original link is: https://www.bbc.co.uk/sport/football/61853292?at_medium=RSS&at_campaign=KARANGA