Lucy Bronze: ‘I learned a lot from 2019 World Cup heartache’ 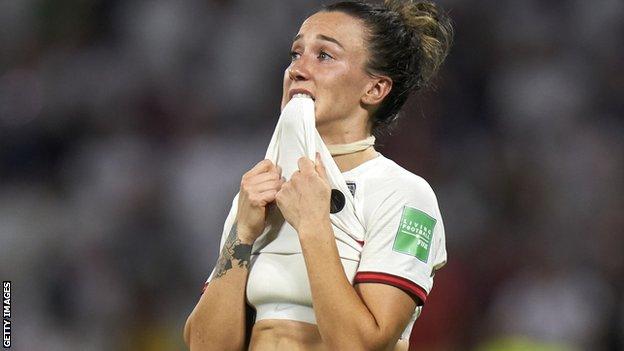 England defender Lucy Bronze said the heartache of losing the 2019 World Cup semi-final "taught her more than anything else" in her career.

Bronze, 30, is preparing to play in a fourth successive major tournament semi-final at Euro 2022 on Tuesday.

The 2-1 defeat by eventual champions the United States in 2019 left Bronze in tears on the pitch at full-time.

"It probably hit me a lot harder than other people," said Bronze, who had won the treble with Lyon that season.

"When you're in the best form of your life, that's when you feel like it is your time. That taught me more than anything else has - even when you invest, things can always go wrong.

"It's probably why I'm a lot more cool now. I've been at those very high heights and still been knocked down. It's a feeling that I don't particularly enjoy being reminded about but it's something I learned a lot from."

Bronze was given the Silver Ball at the tournament - presented to the second-best performer - and in 2019 she became the first English footballer to win the Uefa Women's Player of the Year. A year later, she was named Fifa Best Player.

"Twenty nineteen was one of my best years," she added. "Every time I was on the pitch I felt like I couldn't do much wrong. I was on that high end and at the top of my game. Obviously I had that dream of winning the World Cup."

England take on Sweden in Tuesday's semi-final at Euro 2022 and Bronze said it is a "huge opportunity".

"England's always been my biggest focus and during my entire career I've wanted to lift a trophy for England," she added.

'Players are used to being in winning teams'

Several of the current England squad have experienced those semi-final heartaches but Bronze hopes they can use that to their advantage.

"So far things have been a little different from previous tournaments but psychologically we've always been prepared to be at the top.

"A lot of players are used to being in winning teams now more than ever. There are a lot more of those processes that our players are now used to."

"I've been lucky enough to be in some very strong England squads, but the depth we have [now], the level we can train at, is incredible," she added.

'We know it's obviously a big deal'

England are two wins away from their first major tournament triumph and they could do so on home soil at Wembley next Sunday if they reach the final.

"That would be amazing and obviously that's been the goal - every team starts the tournament wanting to end it as the European champions," said Bronze.

"But the team is just very settled. It's probably the most relaxed we've been as an England team in a tournament.

"We're the favourites and the hosts, but as a team we're very level-headed and we're not focusing on a final or lifting a trophy just yet."

Bronze is also aware of the impact winning Euro 2022 would have on the women's game in England.

"We've been made well aware for the previous year or two how big an impact this tournament can have," said Bronze.

"As soon as England were named as the hosts, we [knew we] had an opportunity to inspire the nation, to change the game in our country. We know it's obviously a big deal."

This news item was provided by the BBC Sport - Football website - the original link is: https://www.bbc.co.uk/sport/football/62277162?at_medium=RSS&at_campaign=KARANGA