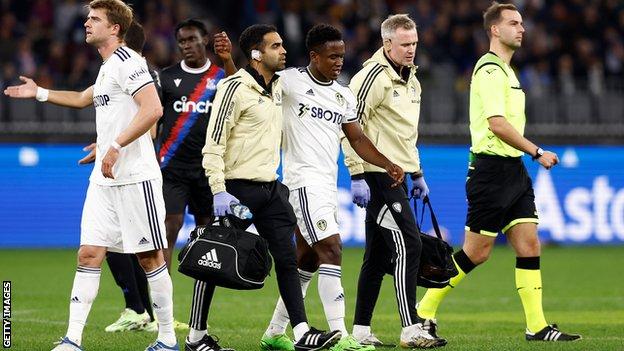 Leeds United manager Jesse Marsch says Luis Sinisterra has a hamstring injury but hopes it will not keep the winger out for long.

Sinisterra went off with the problem during a 1-1 pre-season draw with Crystal Palace in Perth, Australia.

The 23-year-old Colombia winger signed for Leeds from Feyenoord this summer in a deal reportedly worth £21m.

"Luis had a little hamstring injury. We're hopeful it's not too much, too long and too severe" said Marsch.

"Every time we have a hamstring injury I am totally dissatisfied because it is reflective of everything we do with them physically."

Leeds took the lead through a Rodrigo penalty after Joel Ward was adjudged to have fouled Crysencio Summerville before Jean-Philippe Mateta levelled.

Like Sinisterra, Marsch also saw midfielder Adam Forshaw forced off in the first half.

"Adam had Mateta lean on him and tweaked his knee," added the United boss. "Hopefully it is not so bad. We will get more information in the next days."

Asked about reports of Rene Maric becoming his assistant at Leeds, Marsch added: "More later this week, but I know who he is."

This news item was provided by the BBC Sport - Football website - the original link is: https://www.bbc.co.uk/sport/football/62266512?at_medium=RSS&at_campaign=KARANGA