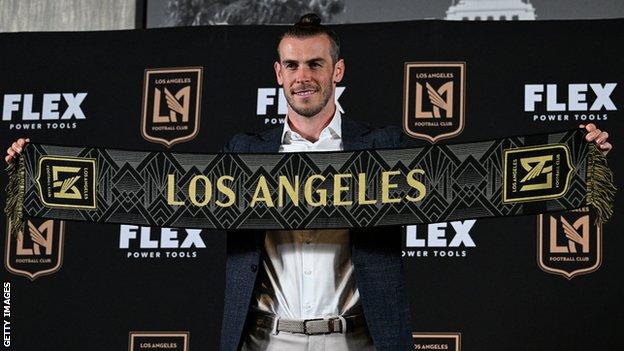 Gareth Bale came on for Kwadwo Opoku in the 65th minute

Gareth Bale scored his first goal for Major League Soccer side Los Angeles FC with a late strike in their 2-0 win over Sporting Kansas City.

The 33-year-old Wales forward, who made his debut last week, fired in a low shot seven minutes from time after coming on as a second-half substitute.

LAFC stay four points clear at the top of the Western Conference standings.

"Obviously, I think the most important thing is that we won the game, first and foremost," Bale said.

"[It's] nice to come and grab a goal and help the team get the three points.

"From a personal point of view, it's nice to get off the mark but more importantly get the three points."

Bale, who will spearhead Wales' campaign at the World Cup in Qatar later this year, signed for LAFC on a free transfer from Real Madrid earlier this month with an option to stay for the 2024 season.

"The transition's been what I expected," he added. "I'm getting my fitness back up pretty quickly, and the club's doing an amazing job to progress me and not push me too quick.

"I'm starting to feel better and better as training goes on, and [I was] glad to contribute tonight."

Bale launched the move which set up his goal, quickly releasing striker Cristian Arango with a pass from deep inside his own half.

Arango, who had scored LAFC's opener, held up the ball well and then rolled a pass into the path of Bale, who had sprinted up in support of the counter-attack.

He took his time before prodding his finish past Kansas City goalkeeper Tim Melia.

This news item was provided by the BBC Sport - Football website - the original link is: https://www.bbc.co.uk/sport/football/62282546?at_medium=RSS&at_campaign=KARANGA