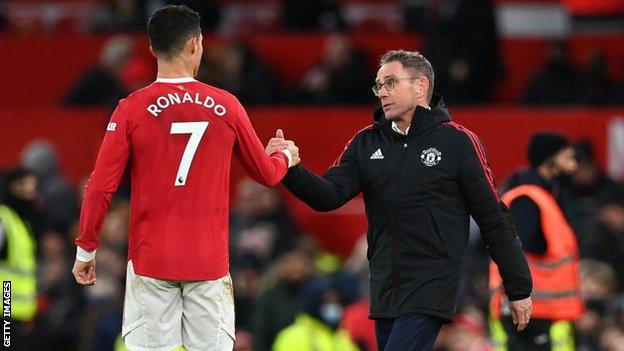 Manchester United interim boss Ralf Rangnick wants his players to hold each other to account after Cristiano Ronaldo questioned their mentality.

Ronaldo has expressed concern about the attitude of some his team-mates and suggested it needs to be better for United to be successful this term.

The Red Devils are currently seventh following a draw and a defeat in their last three league games.

"We have to work and develop as a team together," said Rangnick.

German Rangnick added: "If it's necessary to speak in a very direct manner to the boys it helps a lot, even in the locker room.

"If Cristiano, for example, or any of the other players address that to the players directly on the pitch or in the locker room, they are more than welcome to do that.

"I will do that myself as a coach with my coaching staff in the pre- or post-match video we do with the team and on the pitch.

"But we can only develop individual players if we develop the performances of the team. This is the only way."

Rangnick used Marcus Rashford as an example of how he believes the players are working hard to be able to do their best on the pitch - even if it is not necessarily coming off for them at the moment.

The forward has struggled for form this season and was unable to make an impact as Manchester United edged past Aston Villa in the FA Cup third round last Monday.

Ahead of the two sides meeting again on Saturday at Villa Park in the Premier League, Rangnick said of Rashford: "I was not a striker myself as a player, but as a striker it's all about playing well, scoring goals and getting assists. If that does not happen over a period of time it is not so easy.

"As long as he's trying to give his very best and he did that in training, - there were quite a few training sessions in the last couple of weeks where he trained on a really high level - and that's why I always gave him the chance to play again.

"As long as he does that he will always be on my list to play and be in the starting XI."

This news item was provided by the BBC Sport - Football website - the original link is: https://www.bbc.co.uk/sport/football/59944989?at_medium=RSS&at_campaign=KARANGA