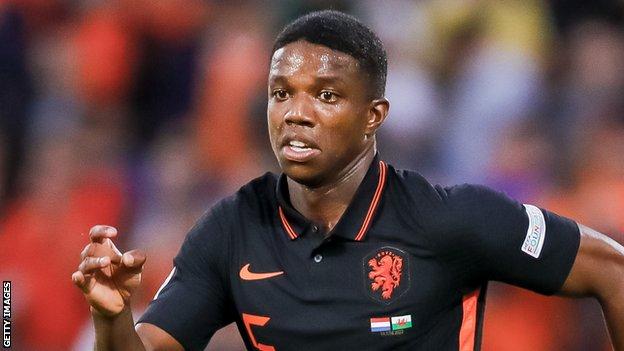 Malacia made his debut for Feyenoord when he was 18

Manchester United have signed full-back Tyrell Malacia from Feyenoord on a four-year contract until June 2026, with the option of a further year.

Malacia, who made 136 appearances for Feyenoord, is the first new arrival of Erik ten Hag's tenure as United manager following his move from Ajax.

"It's an incredible feeling to have joined," he said.

Malacia added: "This is a new chapter for me, a new league with new team-mates and a tremendous manager leading us.

"I know from playing against his teams in the Eredivisie, the qualities that he has and what he demands of his players.

"While I know that I am still young and will continue to develop, I can promise the United fans that I will leave everything on the pitch every time I pull on the red shirt."

The left-sided defender had been in talks with French club Lyon before United stepped in.

It had been hoped the deal for Malacia would be done on Monday but it was delayed waiting for a work permit.

It is anticipated he will now be part of the United squad that leaves for its pre-season trip to Thailand and Australia on Friday afternoon.

John Murtough, United's football director, said: "Tyrell is an exciting, dynamic young footballer with excellent experience for his age, including five seasons in the Eredivisie, a European final and full International honours for the Netherlands.

"We look forward to seeing him continue to develop under the guidance of Erik ten Hag and his coaching team in the years ahead."

The announcement comes just a day after it was reported Denmark international Christian Eriksen had agreed on principle to join United.

The 30-year-old's short-term contract at Brentford ended last month and it is believed Eriksen could also have returned to Thomas Frank's side, but the lure of playing for United proved too much.

A three-year contract is being prepared for the midfielder, who is still to have his medical at Old Trafford.

This news item was provided by the BBC Sport - Football website - the original link is: https://www.bbc.co.uk/sport/football/62010793?at_medium=RSS&at_campaign=KARANGA