Mark Parsons: The English boss leading the Netherlands at the Euros 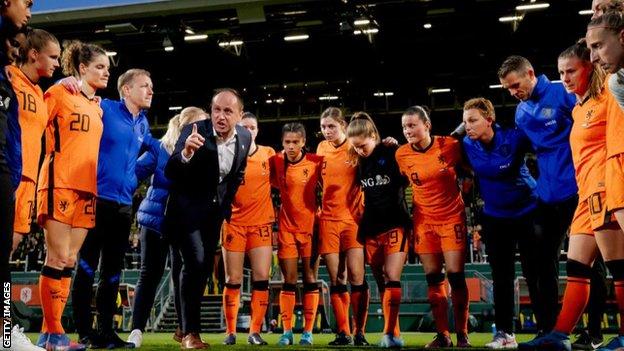 Mark Parsons has coached some of the world's greatest players since leaving England more than a decade ago, though his first job back on UK turf this summer was to manage daughter Edie's Cranleigh under-8s side.

"I needed to get some experience on home soil," laughs the Englishman, 12 years since he departed Chelsea reserves to pursue a career in the United States.

On Friday, he will return as boss of the Netherlands, who face England in a friendly at Elland Road as they prepare to defend their Women's European Championship title in his home country in July.

Life has changed dramatically for Parsons since 2010, establishing himself as one of the women's game's top coaches via roles with DC United and Washington Spirit, before a huge period of success with Portland Thorns.

But the Covid pandemic made visiting family difficult and he has enjoyed life in the Netherlands since relocating in January.

"The biggest compliment is everyone in the federation is giving me everything I could ask for to succeed," the 35-year-old tells BBC Sport. "Their commitment to help me be effective is absolutely top."

Friday's friendly will pit Parsons against his predecessor in Lionesses boss Sarina Wiegman, who guided the Dutch to Euros glory in 2017 and a World Cup final two years later.

"I was being called to work with world-class players at the top of the women's game with youth players coming through," adds Parsons.

"What Sarina did is exceptional. I don't think it is smart to take over from someone like that, you let someone else take over and then you take over from them because it is going to be hard.

"That is the logical way, but that is also not me. The bigger the challenge, maybe the more attracted I am."

'We won't be ready at the beginning to win it' 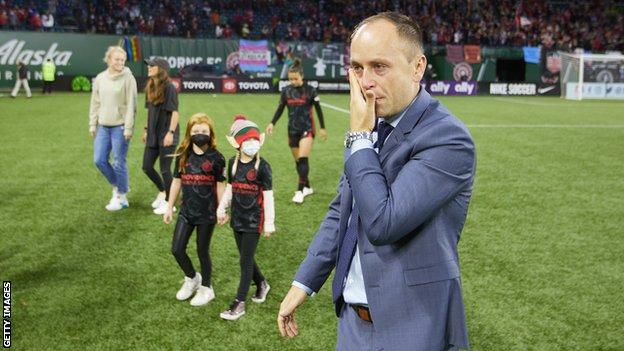 One of the biggest challenges Parsons has faced in transitioning from club to international football is making the most of the time he gets with players.

"I am always going to be very involved in everything, so in the international game that adaption has been quick - scouting, building a connection, player development, staff development, your vision of football.

"That part is easy, the difference is the time, which now means you have to be unbelievably efficient. The detailed planning has to be immense, I am still learning how to be more efficient.

"I want to get things perfect and in international football you may not have the time to do that, you have to prioritise, that is hard for me - I want to be the perfect team in every area."

Parsons is confident in the work so far, with part of the process building a deeper connection with his squad.

"You can be more constructive and critical in a supportive way," he says. "If you are not connected there is no trust."

Expectations are high in the Netherlands - who begin their title defence against Sweden in Sheffield - despite the coach saying they remain behind a number of countries in their evolution as a team.

"The England game is going to be key because you don't really know where you are until you play top teams," he adds.

"Now is that possible? Absolutely. We need to be ready by the last game. We have got to get there and we are going to need to grow through the tournament, need to win games we should win and win games maybe we shouldn't, and that is what top teams do." 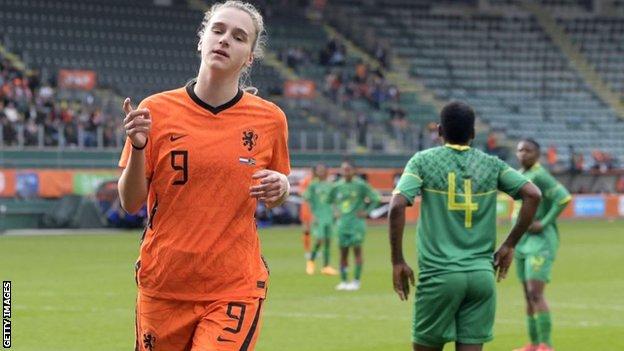 The Netherlands can also count on the support of young Edie, who has assured her dad she will be wearing orange this summer - although the country's star forward, Vivianne Miedema, has already started trying to change his daughter's club allegiances to Arsenal.

"She got to meet Viv and that was special," says Parsons. "My daughter supports Chelsea, but Viv of course went straight to work: 'So, who do you support?!' My daughter went, 'I kinda like Chelsea and also kinda like Arsenal…' I'm fuming! Viv says 'we'll turn that 100% Arsenal soon...'

"We get in the car and I say 'rule number one, you know who you support and no one is ever going to change that!' She says 'dad, I was just being polite'.

"She has sat on the pitch and talked to Christine Sinclair, Tobin Heath, Marta [who all play in the US] - she thinks they are best friends and she can FaceTime them whenever.

"But the Dutch players are like how I looked at players when I was growing up - they are gods to her. She is getting older and [is sitting] in the stadium with the Dutch fans where, if Viv waves at someone, kids are fainting. So she is able to see that."

Edie, along with his wife Hannah, moved to Surrey when he took the Netherlands job. "Not being with them is tough but that only adds to the motivation of having to make the most of every moment, trying to help these players, the staff, this team, because of that sacrifice."

Come 31 July, 50 miles down the road from Cranleigh, the dream is to lead that team out in the Euros final at Wembley.

"I never enjoy the moment enough because I am so focused on helping the team," says Parsons.

"When I reflect and look back, I will have had, for the first time, multiple friends and family where I am working. It is going to be very special."

This news item was provided by the BBC Sport - Football website - the original link is: https://www.bbc.co.uk/sport/football/61726461?at_medium=RSS&at_campaign=KARANGA