Millwall and Stoke played out a 0-0 draw on the opening weekend of the new Sky Bet Championship season in a game of few chances at The Den.

Tyrese Campbell and Sam Vokes went closest to scoring for the Potters but they could not break down a stubborn Millwall defence and claim their first opening-day win since 2009.

Millwall missed the play-offs by just two points last season and were typically rigid at the back but they failed to test Adam Davies in the Stoke goal.

Stoke won three of their final five games to pull clear of the relegation zone at the end of last season and they started brightly in south London.

Vokes' clever flick found captain Sam Clucas in the box but his shot was smothered by Millwall goalkeeper Bartosz Bialkowski, who was making his 50th Lions appearance.

Millwall responded when Ben Thompson blazed over the crossbar from the edge of the box before Jon Dadi Bodvarsson shot straight at Davies. 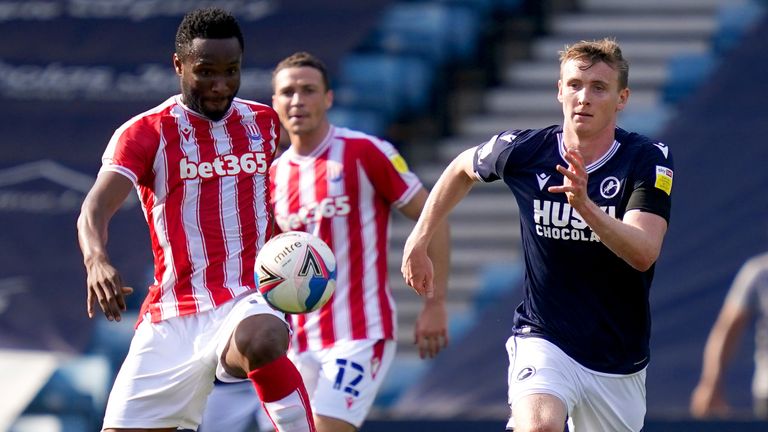 However, Stoke took control of the match and camped in the Millwall half, with Campbell going closest to scoring when his deflected shot fizzed narrowly wide from 12 yards.

The Potters huffed and puffed in the first half but could not find the breakthrough, with their final pass too often going astray.

However, new signing John Obi Mikel helped to shore up their defence - which was the seventh worst in the division last season - as Stoke worked hard to keep Millwall at arm's length.

The hosts started the second half strongly but Stoke had the first attempt when Vokes turned his man on the edge of the box and dragged his shot narrowly wide.

Millwall sent on target man Matt Smith, along with Connor Mahoney, while Stoke sent on Steven Fletcher, as both sides searched for a winner.

Smith added an extra dimension to Millwall's attack, holding the ball up and bringing others into play and Jed Wallace almost benefited. He picked up a Smith knock-down on the left and spun past James Chester before lashing a shot over the bar.

Millwall had a golden chance to win it with eight minutes left when Wallace sprinted clear down the right on the counter-attack and squared it for Mahoney, but his shot was blocked by a desperate Tommy Smith.

Stoke had a late claim for a penalty when substitute Jacob Brown went down in the box but he was instead booked for diving.

This news item was provided by the SkySports | News website - the original link is: https://www.skysports.com/football/millwall-vs-stoke/report/429712