Moment of Truth: What does it take to be a football manager?

Last updated on 3 hours ago3 hours ago.From the section Football

This brand new podcast gives an all-access insight into Rotherham and Oxford's seasons...

Have you ever wondered what it's like to be a football manager? Beyond simulation computer games, that is.

A new podcast on BBC Sounds takes listeners into a world of sleepless nights, imposter syndrome and the obsessive behaviours of two managers in League One - the third tier of English men's football.

Moment of Truth follows Oxford United's Karl Robinson and Rotherham United's Paul Warne, who both agreed to wear microphones for the final stages of the 2021-22 season.

In 2010, Robinson - at the age of 29 - became the youngest Football League manager when he took the MK Dons job. He has since led Charlton and Oxford, where he's been since 2018.

Warne, meanwhile, was named caretaker manager of Rotherham in 2016, becoming permanent boss in January 2017. Rotherham was the club at which he spent most time as a player, making 292 appearances before retiring in 2012.

Over 15 episodes, the first six of which were released on Thursday, we get a real sense of what goes on behind the scenes - from torment over squad selections to compulsive good-luck superstitions.

Here are just a few takeaways from episodes one to five. 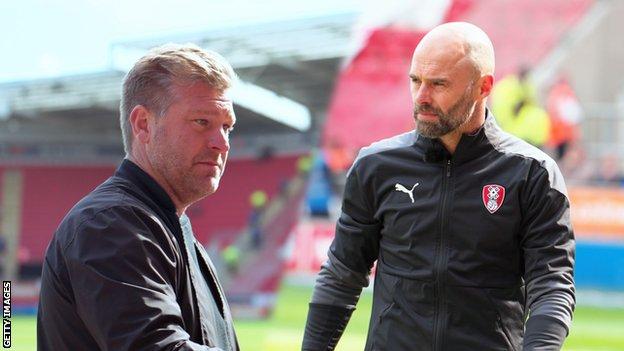 Robinson's promotion from assistant to manager while still in his 20s surprised plenty of people - and in episode three of the podcast he reveals it wasn't his ambition.

Despite feeling the job was thrust upon him, the Liverpudlian, now 41, stayed for six years - but he says he didn't like himself in the early days.

"My arrogance ran away with itself, but it was to protect me from failure," he says.

Warne, 49, talks about his "imposter syndrome" being "through the roof" as a manager.

His first season in charge ended in relegation, but he has now been in the job for five years, during which Rotherham have cycled between the Championship and League One.

Warne says he turned down the manager's job three times to begin with.

With the end of a hard-fought season approaching, Paul Warne delivers a memorable speech

One of the big themes of the series is whether the managers actually get any joy from their jobs.

Robinson says several times that he loves football, but when he's asked what it's actually like to win and lose, he speaks more in terms of relief than real satisfaction.

"When we lose, I feel sorry for the players because I know they always try," he says. "I feel like I've let fans down.

"When we win, I just feel like I can relax: 'You've not let anyone down this weekend.'"

That sentiment is echoed by Warne.

"To win as a manager is just pure relief," he says. "I wouldn't say happiness.

"To lose, it's just the self-recrimination, that's the worst bit. If you win: 'You don't have to beat yourself up tonight, just be a husband, be a dad.' If you lose, it's the opposite. You're a hostage to your own thoughts. That's what I don't like."

And he goes even further.

"I don't think management makes me happy," he says. "It brings pockets of happiness and pockets of sadness."

In episode five, there are discussions about what music is played in the dressing room. Warne describes a player's taste as "rubbish", preferring Fleetwood Mac and heavy rock outfit The Cult.

There's also a moment in episode five when, before the Papa John's Trophy final, he forces his players to listen to Not Nineteen Forever by The Courteeners.

"You're not 19 forever," he implores the players. "You won't be a professional footballer forever. It'll go in a heartbeat. You've got to grab the day.

"I want you to go round the room and thank everyone, shake their hands, hug them."

Whether it was Warne's rousing speech or the song that did it, something worked as Rotherham came from behind twice on the day to lift the trophy. 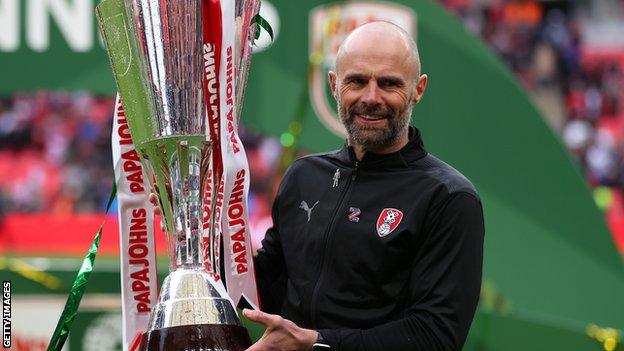 Oxford's psychotherapist thinks Robinson may be dangerously addicted to football

Oxford believe they are the only team in the top four English divisions to have a psychotherapist embedded inside the club.

And Robinson talks in episode two about why it's important to have someone who "treats the person" rather than the player.

Robinson admits he thinks he is addicted to football.

"It's like a musician. If you see a musician trying to leave what they do, they'll always go back to it because they're addicted to it." 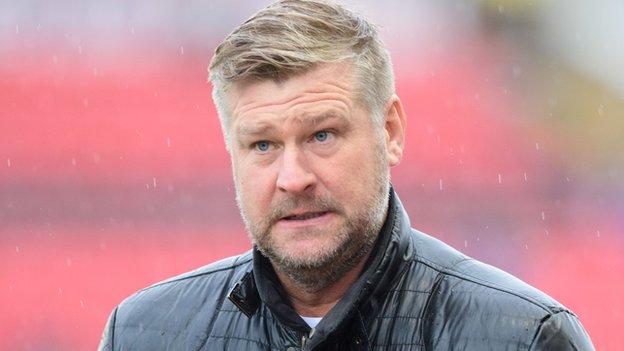 Robinson doesn't allow himself any days off from football

What the two men disagree on is whether they think that particular addiction constitutes a problem.

"I think you can be lucky to find something you're addicted to that's enjoyable," he says, adding: "Who am I hurting?"

"I sometimes worry with you about burnout and the ability to carry on working ridiculously long hours," he says.

This news item was provided by the BBC Sport - Football website - the original link is: https://www.bbc.co.uk/sport/football/61953524?at_medium=RSS&at_campaign=KARANGA