Cardiff boss Neil Harris, who spent 17 seasons at Millwall as a player, coach and then manager, looked like he would be beaten on his first return to his old club since leaving 13 months ago, as his side struggled to respond to Smith's 35th-minute opener.

But Cardiff, who were second-best for long periods, finally hit back with 10 minutes to go, before both sides spurned glorious late chances to find a winner. 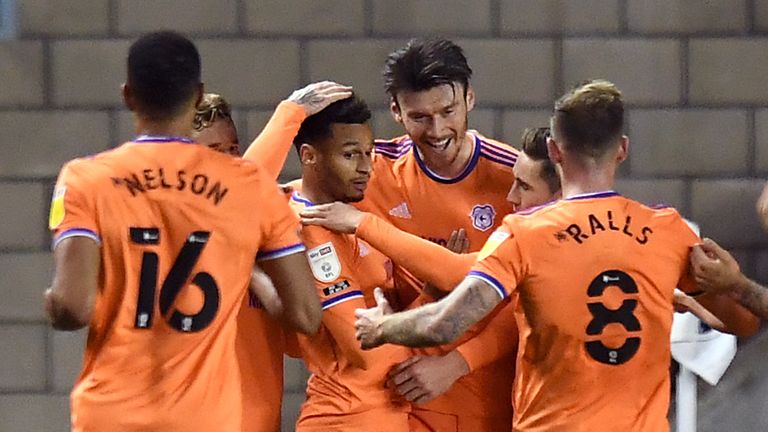 There was very little goalmouth action in an attritional first half but Cardiff shaded the early stages, Robert Glatzel turning inside Shaun Hutchinson and firing over after just five minutes.

That was about as good as it got for the visitors, though, in a turgid first half-hour as Millwall allowed them plenty of possession but very few clear opportunities.

Joe Bennett threatened occasionally from left-back, but the hosts were easily able to deal with his deliveries when Cardiff worked themselves into crossing range.

Millwall took the lead 10 minutes before half-time with their first meaningful chance - and it was at least in part down to a mistake from Cardiff keeper Alex Smithies.

Shaun Williams' left-wing cross was an inviting one, but Smithies should never have been tempted to come for it. In the end he got nowhere near, and Smith guided it past the stranded keeper and into an empty net.

The goal briefly sparked Cardiff into life and they almost drew level just before half-time when Bartosz Bialkowski was forced into a fine save, tipping Glatzel's header over the bar from Junior Hoilett's cross.

Millwall should have doubled their advantage soon after the break, Jed Wallace delivering a perfect, floated cross, but Ben Thompson somehow headed over from six yards despite being completely unmarked.

And they would be made to pay for that miss when Cardiff, who dominated the ball but scarcely worked Bialkowski, finally turned possession into a goal with 10 minutes to play.

The goal was simplicity itself, a straight ball catching out the Millwall defence, with Moore showing pace and strength to hold off Jake Cooper before firing past the keeper at the near post.

It could have got worse for Millwall, Bialkowski pulling off two excellent saves to deny first Harry Wilson and then Moore, and Murray Wallace clearing off the line in stoppage time.

For Millwall, Jon Dadi Bodvarsson missed a wonderful chance on the counter, as a drab game exploded into life in the closing stages.

But in the end both sides had to settle for a point, the sixth consecutive time these two sides have failed to produce a winner.

This news item was provided by the SkySports | News website - the original link is: https://www.skysports.com/football/millwall-vs-cardiff/report/429843