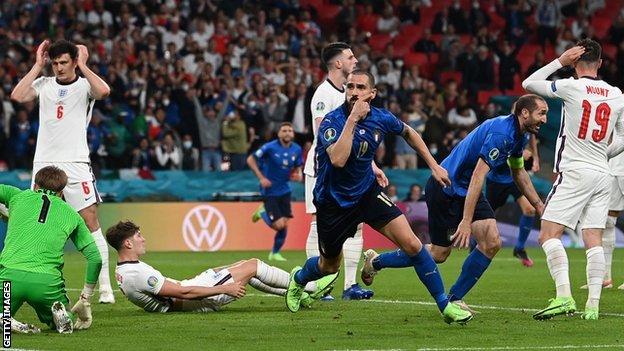 England last faced Italy in the Euro 2020 final at Wembley

England's Nations League game away to Italy on 23 September will take place at the San Siro in Milan.

It will be the first time the Three Lions have played at the ground, home of both Inter and AC Milan, since 1939.

The two sides last met when Italy won the Euro 2020 final on penalties at Wembley last summer, a game marred by violence from home supporters.

The home fixture on 11 June at Molineux will be played without fans as England's punishment for the disorder.

England travel to Budapest for their first Nations League group A3 game against Hungary on 4 June (17:00 BST) - again in an empty stadium, because of Hungarian fans' behaviour at Euro 2020 - before travelling to Munich to face Germany on 7 June (19:45 BST).

Gareth Southgate's team will then host two games at Wolves' Molineux Stadium - against Italy on 11 June and Hungary on 14 June (19:45 BST).

Following the trip to Milan, England will round off their group stage fixtures against Germany on 26 September (19:45 BST) in front of fans at Wembley.

England will then turn their attention to the 2022 World Cup in Qatar in November.

This news item was provided by the BBC Sport - Football website - the original link is: https://www.bbc.co.uk/sport/football/61607328?at_medium=RSS&at_campaign=KARANGA