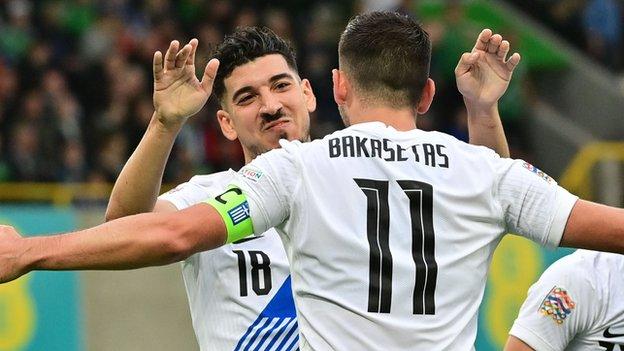 Northern Ireland's search for a first Nations League win has now stretched to 11 matches after a deflating home defeat by Greece.

Visiting captain Tasos Bakasetas scored the only goal of a somewhat scrappy game at Windsor Park late in the first half.

Substitute Kyle Lafferty fired just over the crossbar with a well-hit free-kick late on as the hosts came to life in the final 25 minutes after a flat first-half performance.

Ian Baraclough's men are now away to Cyprus on Sunday in their second League C Group 2 match before their busy schedule takes them to Kosovo on 9 June, then they complete their opening quadruple-header at home to Cyprus on 12 June.

Thursday night's result made it eight defeats and three draws in the Nations League for Northern Ireland, who are playing in the third tier of the competition for the first time after being relegated.

Baraclough is without a number of senior players for this camp and gave a competitive debut to Fleetwood Town's Paddy Lane, while Manchester City's 18-year-old Shea Charles, one of four new call-ups, came on as a late substitute for his senior international debut.

Greece's decisive goal arrived in the 39th minute when the Northern Ireland midfield failed to track the forward run of visiting captain Bakasetas.

When Dimitris Limnios played the ball inside from the right, Bakasetas had far too much time and space on the edge of the box as he controlled the ball well and planted a fine low strike wide of Bailey Peacock-Farrell and into the far corner.

The double substitution of Lafferty and Niall McGinn on the hour-mark injected much-needed life into a low-key showing from the home side, and both subs came close to grabbing an equaliser.

McGinn hit a snapshot from the edge of the area on 66 minutes but it was straight at Benfica keeper Odisseas Vlachodimos and a few minutes later captain Steven Davis - further extending his caps record with a 135th appearance - hit a right-foot curler over the crossbar.

It looked like the stage might be set when, with five minutes remaining, the returning Lafferty stood over a free-kick 20 yards out, and his shot was well hit but it went just over the crossbar.

The 34-year-old Kilmarnock striker, who has now gone over 19 hours of international football without a goal, had returned to the squad having been left out of the last three camps by Baraclough.

Northern Ireland fail to threaten in flat first half

Despite a number of senior players being unavailable for Northern Ireland, there seemed to be an upbeat mood in the camp, boosted no doubt by captain Davis signing a new contract at Rangers and speaking of how much he was looking forward to continuing to play for his country.

Manager Baraclough was upbeat too, once again talking up the positive aspects of having so many new and young players in his squad, and showing faith in two of them as he selected youngsters Conor Bradley and Paddy Lane at wing-back in his favoured 3-5-2 formation.

Fleetwood's Lane, 21, was making his first competitive start on the left, having made his debut in March, while 18-year-old Bradley of Liverpool was winning his sixth cap.

Bradley has impressed in his early appearances but he struggled in the first half with the home crowd not getting to see the surging forward runs that he has delivered in his early international career. 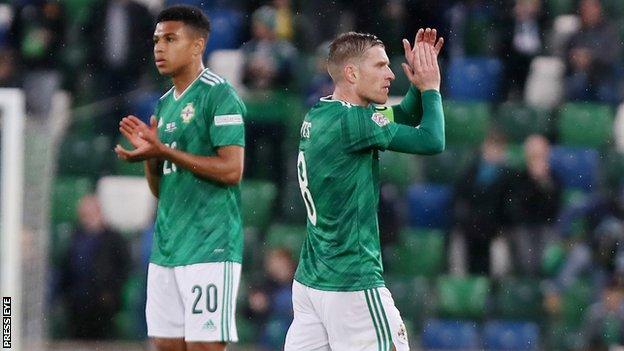 Lane struggled to impose himself on the left flank but both worked tirelessly throughout, even if their youthful exuberance led to them committing a few needless fouls as the visitors looked to get in behind them.

Northern Ireland as a whole simply failed to fire in the first half and were unable to mount enough attacks to put the Greeks under any pressure. The quality of ball that was being played to front pair Gavin Whyte and Shayne Lavery was poor, though Whyte did turn smartly and get a decent shot away on 18 minutes, but it was too close to goalkeeper Vlachodimos who saved.

Lavery got in down the right and Saville got in down the left, but each of their crosses were blocked, while Paddy McNair and Lane both hit inviting deliveries that nobody was able to convert.

Greece were patient in possession without creating too many opportunities themselves, though they came close in the 23rd minute when Giorgos Giakoumakis' header on the stretch from a Lazaros Rota was saved by Bailey Peacock-Farrell.

This news item was provided by the BBC Sport - Football website - the original link is: https://www.bbc.co.uk/sport/football/61588591?at_medium=RSS&at_campaign=KARANGA