Netherlands 3-2 Wales: Too many positives to be down - Wales Boss Page

Wales manager Rob Page says he could not be prouder of his players despite another late defeat by the Netherlands.

In an overly congested window, Wales' three Nations League defeats will be overshadowed by qualification for the 2022 World Cup.

"There are too many positives to be down about the defeat," said Page.

The results leave Wales bottom of Group A4 in the Nations League but for Page, the players and the always-vocal Welsh fans, the countdown to Qatar has begun.

He added: "We're all disappointed down there, of course we are, we hate losing games of football.

"But I'm going to focus on the positives and we build on that."

It has been a historic 14 days, from ending a 64-year wait to qualify for a World Cup to competing in the top tier of the Nations League for the first time.

The five games, roughly one every three days, has taken its toll on the Wales squad, with Joe Allen, Joe Morrell, Kieffer Moore, Danny Ward and Neco Williams all missing from Tuesday's trip to the Netherlands.

A fresh knock to Rubin Colwill before kick-off and another suffered by Joe Rodon in the match means the injury list has increased.

But for the Welsh players, this extended season is finally at an end, something which delights Page.

"It's been crazy, the boys need to get their boots off now and have a break," he said.

"It hasn't helped because we had the final in among four tough games against top-class opposition, but the demand is so high.

"We haven't got the luxury of being able to rotate 11 players like the Netherlands have, but I couldn't be more proud of us as a group.

"Our leveller is our team spirit, there's more to come, believe me."

'I'd rather it happen now than in the World Cup' 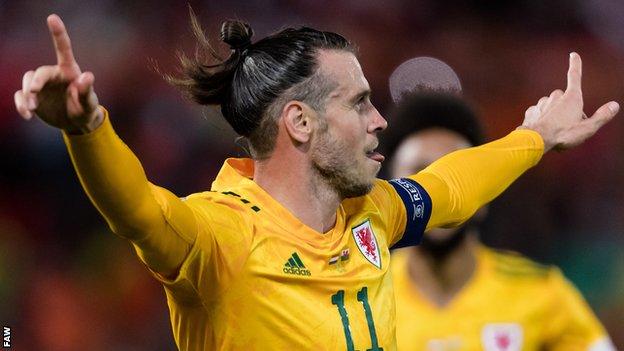 Just as they did in Cardiff seven days previously, Wales thought they had snatched a late draw against the Dutch.

Last week it was Rhys Norrington-Davies' header and in Rotterdam it was a calmly dispatched Gareth Bale penalty - his 39th goal for Wales - which seemed to have earned a point.

But on both occasions the Dutch hit back with a late winner, Wout Weghorst in Cardiff and Memphis Depay with an injury-time strike at the Stadion Feijenoord.

After the first defeat, captain Bale said Wales needed to improve "the dark arts", while Page was frustrated by their "naivety".

Speaking after the match, Bale told S4C's Sgorio: "It's hard to take but I'd rather this happen now and we address it than it happen at the World Cup.

"We have to use these Nations League games to improve and get better.

"It's just the finer details we need to iron out. If we can do that it will put us in a good place for the World Cup."

Page added: "Having gone through this experience it will hold us in good stead for future games. We have to be ruthless enough to see games out.

"I don't think it was naivety tonight, we made Holland play route-one football, they went direct then and we didn't win the first header.

"But that's the learning curve for us, lessons are learnt."

This news item was provided by the BBC Sport - Football website - the original link is: https://www.bbc.co.uk/sport/football/61805872?at_medium=RSS&at_campaign=KARANGA