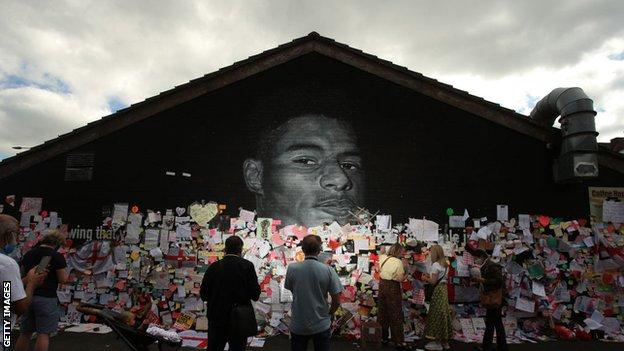 There was an outpouring of support for Marcus Rashford, Jadon Sancho and Bukayo Saka after they received racist abuse online following the Euro 2020 final

Uefa has pledged to work with social media platforms to tackle online abuse as part of a Respect campaign to begin when the women's Euro 2022 starts.

Uefa said the Respect programme will include a Real Scars campaign which "will highlight the devastating effects of online abuse directed at football players, coaches and officials across social media platforms and educate them on how to best defend themselves against such abuse".

"When you say something on social media, you do not realise how painful it is or the consequences it can have," said France and Lyon defender Wendie Renard.

"It can leave a mark because we are all human, we all have emotions."

Uefa added: "The Respect programme targets concrete actions to prevent abusive online behaviour and discrimination during all of its final competitions, including youth, women's and men's competition final matches for the next three years," said Uefa.

This news item was provided by the BBC Sport - Football website - the original link is: https://www.bbc.co.uk/sport/football/62026736?at_medium=RSS&at_campaign=KARANGA