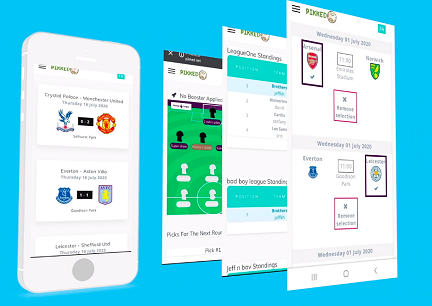 Pikked is an addictive new free to play app designed to appeal to lovers of Fantasy Football but simplifies the process and add levels of addictive excitement. Launching ahead of the new football season, the app is about to change the face of football apps.

Pikked is focused on making predictions on the Premier League. The format of Pikked is simple; just pick three teams each week during the season that you think will win. Once you pick a team you cannot pick that team again for a month. Even casual fans know the difference between the good teams and bad teams, Pikked gives players an app where they can compete against hardcore fans on a more even playing field.

Fantasy Football focuses on selecting players from different teams to fit within a budget and strategically selecting the right players each week. For hardcore football fans this is exciting and understandable but for casual football fans it is difficult to compete or sometimes understand which players will get you points.

Pikked, allows users to transfer and exchange boosts with each other. We have created a marketplace that simulates the real-world transfer market which will boost player engagement. Players have an inbox where they can accept, or decline offers which is completely different to Fantasy Football. The app is simple but the more strategic you are the better you will perform. Casual fans can simply buy additional boosts if they are not as strategically minded.  The play element is making the predictions but enhanced with bidding for other users boosts. Getting notifications when offers are accepted will provide users with a rush that will increase the addictiveness of the app.

Pikked is easy to understand and opens up a league type app that can be used in corporations and social circles. The casual fan will have more of an appetite for Pikked than Fantasy Football, because of the ease of use. Pick your winners, select a boost to obtain more points, transfer boosts with other users and you can create multiple leagues with your friends or work colleagues. You can create leagues against mates, co-workers and chat with each other via Whatsapp at the end of every game week. It is a different type of game that will appeal as a fresh addictive app for every type of football fan.

In Pikked, you can challenge your friends in private leagues and see who has the best intuition when it comes to the beautiful game!

To join the fun head to pikked.net and install the free app. Pikked will be coming to Google Play and the iTunes app store.