Luke Amos scored a late winner for QPR as they beat Huddersfield 1-0 and moved up to fourth in the Sky Bet Championship table.

Amos, recently back from the second long-term knee injury of his career, headed in Chris Willock's cross with nine minutes remaining at the Kiyan Prince Foundation Stadium.

The lively Willock did superbly on the right flank and Amos, on as a substitute, was in front of 'keeper Lee Nicholls to finish from close range.

It preserved Rangers' record of being the only team in the division to have scored in all their league matches so far this season. 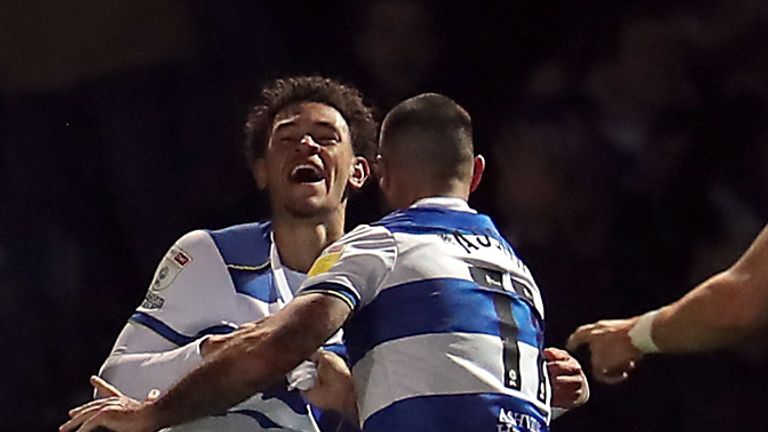 Mark Warburton's side look like genuine promotion contenders and are now unbeaten in five matches - a run which has included three wins and three clean sheets.

They laboured without injured Scotland striker Lyndon Dykes but were eventually rewarded for their persistence.

Huddersfield always looked dangerous and Ollie Turton had a couple of early chances to put them ahead.

And Turton blasted wastefully over following a swift counter-attack as the visitors had the better of the opening exchanges.

QPR created very little before almost going ahead against the run of play when Yoann Barbet's flicked header from Stefan Johansen's right-wing corner bounced off the bar.

That brought Rangers to life and they went close again when Lee Wallace's strike was deflected over by Turton.

They finished the first half strongly, with Charlie Austin seeing a goal-bound effort blocked by Levi Colwill and then sending a right-footed strike over the bar.

The hosts continued to press after the interval and Austin was put through by Andre Dozzell but fired straight at Nicholls, who also held a shot from Ilias Chair.

Nicholls was given a stiffer test by a left-footed strike by Johansen from near the edge of the penalty area, which he also kept out.

R's defender Rob Dickie drilled a shot narrowly wide and Chair missed a great chance when he scooped over after being teed up by Johansen.

At the other end, Dieng saved at his near post to deny Danel Sinani and Matty Pearson was just unable to connect with Josh Koroma's free-kick before Amos broke the deadlock.

On a less positive note for Rangers, the influential Johansen limped off near the end after picking up a knock.

QPR's Mark Warburton: "I'm delighted for Luke after what he's been through. The second surgery was bigger than the first one and he's had to sit there hour after hour in the gym, in the pool, with the physios who've worked so hard with him. To get that goal - they're the lovely moments in football. I came out of the changing room and there were shouts of 'speech' from the players to Luke. He deserves that moment because he has worked tirelessly. You won't find a better young professional.

"It was a chance to cement our place in the top six and start putting daylight between other teams. I'm delighted that we achieved that, because they're the games where you can drop points and look back on in May. So to get that goal, the clean sheet and the points, is really pleasing. In the second half I thought we were the better team. We created chances and were gaining momentum."

Huddersfield's Carlos Corberan: "The game was very demanding. It was a tough and competitive game. The first half was more balanced. Both teams had chances but in the last minutes of the first half they started to dominate the ball. The feeling at half-time was that we needed to have more of the ball. When we didn't, they created more chances. From time to time we had chances to counter-attack, but they were better in the second half.

"When the game is too open you need to have the ball in a way that they can't hurt you. The key for the team is that we have to have the ball. In the last two games we have not had enough of the ball. It is very important to get the ball on the ground and to have more of the ball. They had the ball more than us and I think that is why they have got the three points."

This news item was provided by the SkySports | News website - the original link is: https://www.skysports.com/football/queens-park-rangers-vs-huddersfield-town/report/447565