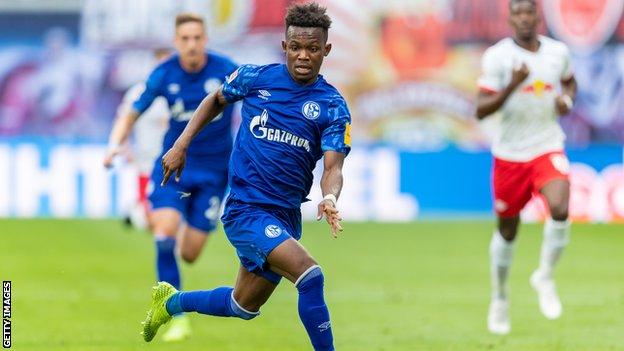 Rabbi Matondo is Rangers' third major signing of the summer

Rabbi Matondo has joined Rangers on a four-year deal from Schalke for an undisclosed fee.

The Wales winger, 21, scored 10 goals in 27 appearances on loan at Cercle Bruges last season, having first joined Schalke in 2019.

He was previously loaned to Stoke City and has been capped 11 times by his country, most recently against the Netherlands in June.

Matondo told Rangers' website he was "absolutely buzzing" to have joined.

"This is a big club with a massive history, and I just want to create more memories and more history here at the club," he said.

And manager Giovanni van Bronckhorst added: "I spoke last week about my desire to add more attacking quality to my squad, and we all believe Rabbi will do that. He will bring many strong attributes to the team."

Matondo's summer capture follows that of Antonio Colak and Tom Lawrence by Rangers.

He has been given the number 17 jersey vacated by Joe Aribo, who was sold to Southampton at the weekend.

This news item was provided by the BBC Sport - Football website - the original link is: https://www.bbc.co.uk/sport/football/62134902?at_medium=RSS&at_campaign=KARANGA