Rafael Benitez: Everton manager to be given ‘full support’ by club after Marcel Brands departure 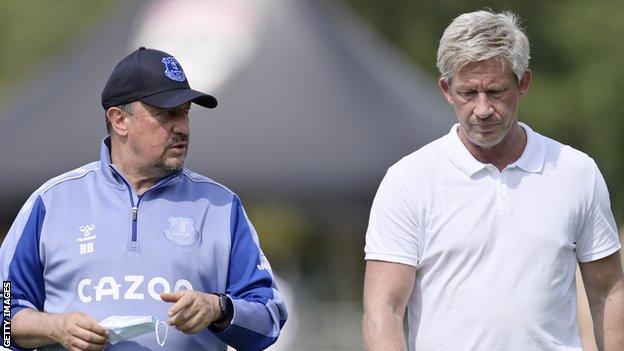 In his leaving statement, Brands pointed to differences with the board

Everton say they will continue to give manager Rafael Benitez their "full support" following the departure of director of football Marcel Brands.

The 59-year-old Dutchman joined from PSV Eindhoven in 2018 but owner Farhad Moshiri has moved to try to tackle the crisis surrounding the club.

Brands has been criticised for his part in Everton's transfer policy which has seen them spend £300m during his reign.

Furious supporters rounded on him and chairman Bill Kenwright at the end of Wednesday's 4-1 Merseyside derby defeat by Liverpool at Goodison Park.

"The board and I agreed that there is a clear difference in the vision and direction for this beautiful club," said Brands.

"This decision has taken some time and some consideration and was one of the most difficult I have faced in my career."

Brands had worked alongside managers Marco Silva, Carlo Ancelotti and latterly Benitez during at his time at the club.

Everton say that they will undergo a strategic review of the football structure "which will inform the best model for the club to proceed with in the long term".

"The owner and directors would like to thank Marcel for the service he has given to the club over the past three and a half years and wish him well for his future," said a statement.

Everton host Arsenal in the Premier League on Monday (20:00 GMT), having taken only two points from their past eight matches, a run that has seen them fall to 16th in the table.

This news item was provided by the BBC Sport - Football website - the original link is: https://www.bbc.co.uk/sport/football/59545845?at_medium=RSS&at_campaign=KARANGA