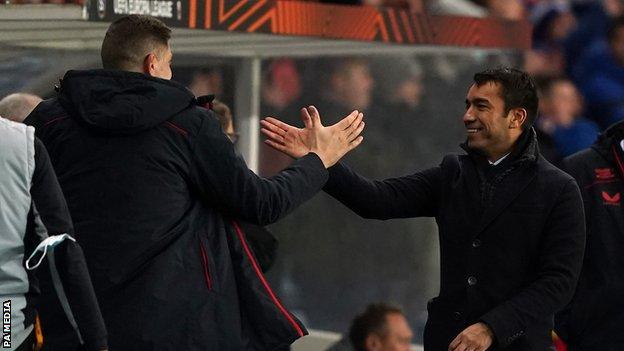 Giovanni van Bronckhorst described his return to Rangers as "truly special" as his team beat Sparta Prague to reach the Europa League knockout round.

It came on the back of a disappointing League Cup semi-final loss to Hibernian, which Van Bronckhorst watched from the stands.

"It was truly really special and I enjoyed every moment of it," he said.

"It's always special to have your first game at Ibrox as manager and I was really happy we could give the fans the game we did.

"Of course, you want to win. That was the most important thing. To win by a margin of two, because then we were through."

After only two days to work with the players, Van Bronckhorst made a slight tweak, switching from Steven Gerrard's favoured 4-3-3 to a 4-2-3-1 formation.

Joe Aribo played as a central number 10, with Ianis Hagi on the right and Ryan Kent on the left, while Nathan Patterson came off the bench in the second half to take Hagi's place on the right wing rather than his usual full-back berth.

And the new Rangers boss was impressed with how his side adapted under pressure.

"It hasn't been easy for the team to come back from a loss last Sunday with only two training sessions to prepare for the game," said Van Bronckhorst.

"I made some changes in the system, the way we play when we have the ball and the way we press.

"I put a lot of effort in the last days in showing my players how they had to play with training sessions, with meetings, with images. I think they handled it really well and they executed my game plan really good."

This news item was provided by the BBC Sport - Football website - the original link is: https://www.bbc.co.uk/sport/football/59425912?at_medium=RSS&at_campaign=KARANGA