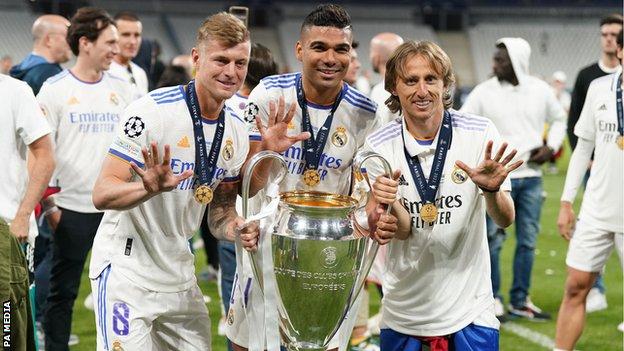 Real Madrid's latest European triumph has been built on drama and incredible comebacks - and has been achieved eight months after they were on the wrong end of one of the great Champions League shocks.

Last September, the Spanish giants were conducting an inquest after losing at home to Moldova's Sheriff Tiraspol in the group stage.

On Saturday, Real were crowned champions of Europe for a record 14th time - twice as many as any other club - after defeating Liverpool 1-0 in Paris.

At the full-time whistle, Real boss Carlo Ancelotti celebrated with his players on the pitch as they took in the scale of their achievement.

"They were probably not even the better team so many times in the Champions League this season," French football expert Julien Laurens told BBC Radio 5 Live.

"Real Madrid were not expected to do this, but with every hurdle, they have overcome it with grit and determination."

'I've never seen a harder route to the final'

Real lost four times in 12 Champions League matches on their way to the final. By comparison, defeat at the Stade de France was Liverpool's fourth in 63 matches across all competitions in 2021-22.

Yet Carlo Ancelotti's side finish the campaign kings of Europe after an extraordinary campaign.

Trailing 2-0 to Paris St-Germain on aggregate in the last 16, Real scored three times in the space of 17 second-half minutes to go through.

They also trailed holders Chelsea 4-3 on aggregate in the closing stages of their quarter-final before Rodrygo scored in the 80th minute to force extra-time. They advanced 5-4 on aggregate thanks to Karim Benzema's 96th-minute goal.

And then they produced the comeback of all comebacks in their semi-final against Manchester City.

Real trailed Pep Guardiola's side 5-3 on aggregate with just one minute of normal time remaining in the second leg - but then Brazilian substitute Rodrygo scored twice to force extra time. 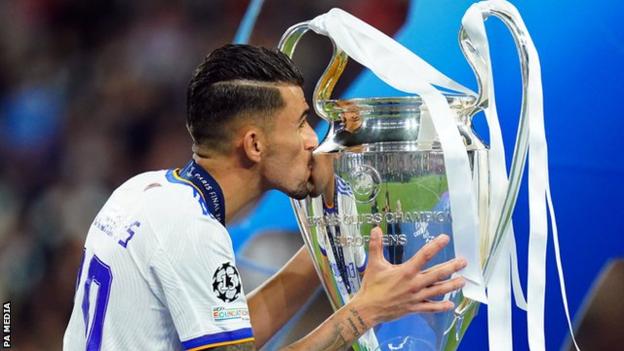 Benzema, who has scored seven Champions League goals against English teams this season, then sent Ancelotti's side to Paris with a penalty.

Even against Liverpool in the final, Real had to weather a strong start by Jurgen Klopp's side - and won despite only managing two attempts on target.

"In my time, I've never seen a harder route to the final," added Ferdinand.

"They've beaten PSG, they beat the champions of England. It's breathtaking."

Former Real Madrid and Liverpool winger Steve McManaman added: "Madrid do what they always do. When they get to finals, they win them. It has been the greatest of successes for them because of the manner and style.

"This Madrid team is weaker but they have got to the final and lifted it."

Although he did not score in the final, Benzema has been the heartbeat of Real's latest European triumph.

Ancelotti has got the best out of the 34-year-old France forward, who has struck 15 goals in Europe this season - including two hat-tricks - and is the Champions League's leading scorer in 2021-22.

Will it be enough to win him the coveted Ballon d'Or, awarded to the world's best player?

"The argument is over for the Ballon d'Or. If Benzema doesn't get it, that will be a travesty," added Ferdinand.

No one has won the Champions League more times as a manager than Ancelotti, who is celebrating his fourth triumph in the competition as a boss.

"I am a record man," said the Italian after the game. "I think we passed through really difficult games." 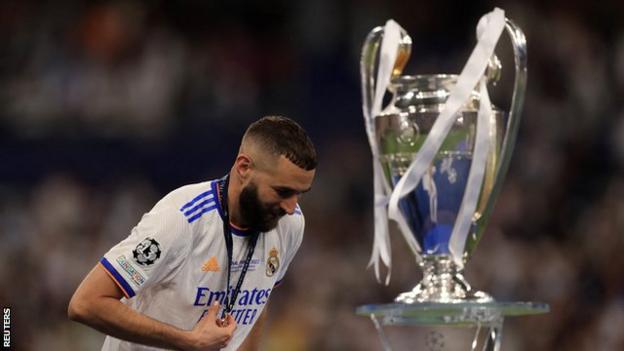 Karim Benzema became just the second French captain to lift the Champions League trophy, after Didier Deschamps with Marseille in 1993

Real were hoping to parade France forward Kylian Mbappe earlier this week, but the striker opted to commit his future to Paris St-Germain.

His decision to stay in Paris did not go down well.

The Madrid press were apoplectic, to the point that in the early part of the week all coverage was about the non-deal rather than the small matter of the Champions League final.

However, Real put all that behind them to overcome the Reds and spark jubilant scenes in Spain's capital.

"This is an incredible generation. They have won it five times in eight years, the biggest competition at club level, the toughest one to win," added Laurens.

This news item was provided by the BBC Sport - Football website - the original link is: https://www.bbc.co.uk/sport/football/61621738?at_medium=RSS&at_campaign=KARANGA