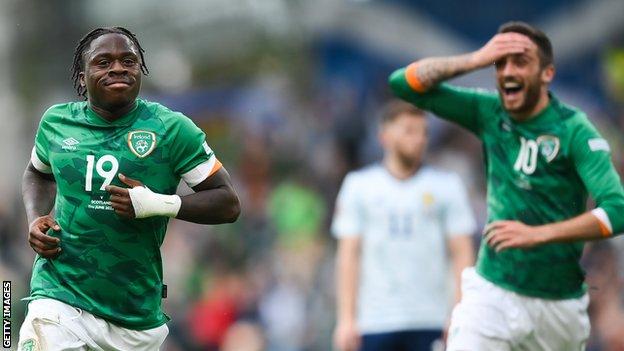 The Republic of Ireland claimed a maiden Nations League win at the 13th time of asking as they saw off Scotland in surprisingly comfortable fashion in Dublin.

Badly in need of points after defeats by Armenia and Ukraine in their first two games, the Republic took a 20th-minute lead through Alan Browne with Troy Parrott doubling the advantage after being teed up brilliantly by the impressive Michael Obafemi.

Obafemi then capped an outstanding individual display by thundering home the Republic's third from distance five minutes before being forced off injured.

The Irish thought they had netted a fourth just after the hour but a VAR review found that Grant Hanley had hooked Scott Hogan's header off the line before it crossed.

While the Republic will bask in the relief of a long-awaited win in this competition, for Scotland it is a disappointing result given how they bounced back from losing their World Cup play-off semi-final with Ukraine by beating Armenia on Wednesday.

Victory lifts the Republic up to second in Group B1, ahead of the third-placed Scots but having played a game more.

Scotland boss Steve Clarke had admitted to being wary of an Irish backlash after their winless start to the Nations League and that is exactly what happened with the Republic looking much sharper and hungrier from the outset at a noisy Aviva Stadium.

Obafemi, one of five players drafted in by Stephen Kenny after the Ukraine defeat, was key to the Republic's rejuvenation in what was the 21-year-old Dubliner's first international start.

It was Obafemi who robbed Scotland centre-back Grant Hanley of the ball before finding James McClean, and the Swansea striker would have connected with McClean's cross at the far post had it not been for Scott McKenna's header flicking the ball behind for a corner.

Thankfully for the hosts, McClean's corner was headed back into the danger area where Browne was able to bundle the ball past Craig Gordon from point-blank range.

While Obafemi played a minor role in bringing about the corner for the Republic's opener, he was the architect for the second.

After picking up a loose ball in midfield, Obafemi checked back to gain a yard on Callum McGregor, took a step-over and, having spotted Parrott's clever dart between Anthony Ralston and Jack Hendry, deftly lifted the ball in for the 20-year-old to nod past Gordon. 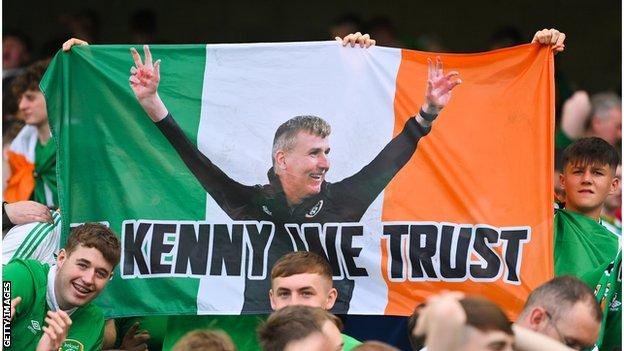 There were contrasting emotions between the Irish and Scottish fans 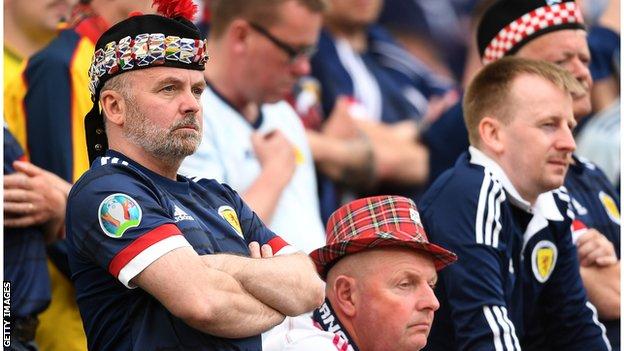 It was, however, an even first half for the most part, and the Republic were fortunate not to have been punished for a couple of sloppy Shane Duffy passes out of defence, both of which resulted in John McGinn shots from the edge of the area with the second coming immediately before the Republic's second goal.

But this was clearly the Republic's day and Obafemi put the game beyond Scotland when he lashed a fierce right-footed shot past Gordon after Billy Gilmour had lost the ball in a dangerous position.

Aside from Hogan being denied by Hanley, the Republic dropped off after Obafemi was withdrawn in the 56th-minute because of injury but the home side's third goal had effectively killed the game as a contest with Scotland failing to muster a meaningful response.

Clarke's side must now look to do that by managing what the Republic could not by beating Armenia in Yerevan on Tuesday (17:00 BST) while the Irish will hope to maintain momentum when they travel to Poland to take on Ukraine later that evening (19:45).

This news item was provided by the BBC Sport - Football website - the original link is: https://www.bbc.co.uk/sport/football/61675617?at_medium=RSS&at_campaign=KARANGA