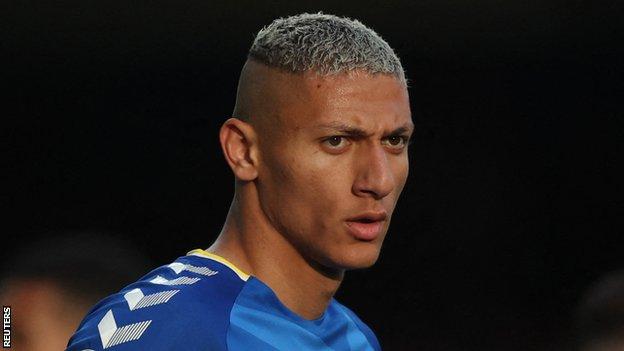 Brazil international Richarlison is set for a medical at Tottenham after Spurs agreed a deal to sign the forward from Everton.

The move will be worth more than £50m but there are some minor issues to be finalised over the exact fee.

Personal terms have been agreed with Richarlison and, barring any unexpected issues, the transfer should be concluded on Thursday.

Since then, he has scored 53 goals in 152 appearances for the Merseyside club, finishing top scorer at Everton last season as the club narrowly avoided relegation from the Premier League.

Richarlison went into the campaign on the back of an exhausting summer, when he played for Brazil in both Copa America and the Olympic Games, and scored 10 goals in the top flight.

Six of those goals came in Everton's last nine games of the season as they finished 16th and four points above the relegation zone.

Tottenham have qualified for this season's Champions League and have signed winger Ivan Perisic,keeper Fraser Forster and midfielder Yves Bissouma so far this summer.

The accounting period for Everton's figures from the 2021-22 campaign ends on 30 June so, if the Richarlison deal is done, it would help balance the Toffees' books after the club posted £372m in losses over the last three years.

Having spent a total of about £30m on Demarai Gray, Vitaliy Mykolenko and Nathan Patterson last season, selling Richarlison for more than £50m would mean the club would make a healthy profit on player sales, although they have also acquired others on loan.

This news item was provided by the BBC Sport - Football website - the original link is: https://www.bbc.co.uk/sport/football/61991765?at_medium=RSS&at_campaign=KARANGA