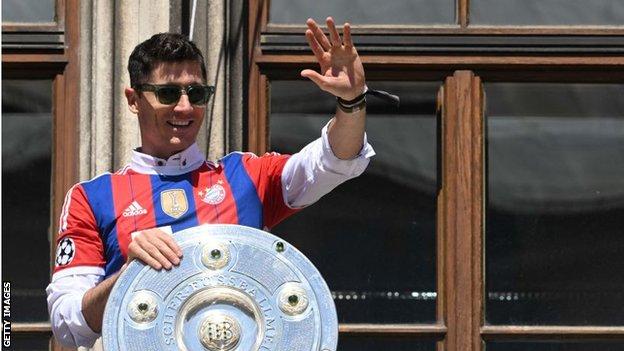 It's finally happening. After months of speculation and fall-outs, Robert Lewandowski is joining Barcelona.

The move will mark the end of an eight-year relationship between Lewandowski and Bayern Munich that saw them win eight consecutive German championships and the Champions League in 2020.

Things did not end on good terms, though. Lewandowski has repeatedly voiced his frustration about his long-time employer in recent weeks.

When he was forced to return to team training in the third week of July, he provokingly arrived late three days in a row and looked uncharacteristically sluggish during training sessions.

Whether the striker was genuine when he stated a while ago that he does not "see any possibility to play for this club any more" remains doubtful. Many around Bayern saw it as a tactic to force his way out of his contract.

The events in recent weeks may tarnish Lewandowski's legacy at Bayern - more so because it is the second time in his career that he attempted to force a move before the end of his contract, as he tried something similar in 2013 when he was with Borussia Dortmund.

If we try to be understanding of Lewandowski's feelings, there might have been justifiable reasons for him to push for a move to Barcelona this summer. Despite a stellar record of 344 goals in 375 games during this eight-year tenure at Bayern, Lewandowski had to wait a long time before receiving any notable international recognition.

He has been particularly disappointed by the fact that the voters for the Ballon d'Or have repeatedly neglected him. Lewandowski has only won the Best Fifa Men's Player award in 2020 and 2021.

More generally, Lewandowski has not built up the kind of name value you might expect from one of the most prolific strikers of his generation. The big-money sponsorship and endorsement deals have gone to other players.

Soon turning 34, now might be Lewandowski's last chance to benefit from his performances commercially and leave a much bigger legacy. A revived Barcelona side under manager Xavi Hernandez could be the perfect place to do that. Lewandowski will be the undisputed first-choice striker at Camp Nou, just as he was at Bayern for eight years.

When Bayern signed Lewandowski in 2014, luring him away from their arch rivals Dortmund, they knew he could become a cornerstone of the team.

What they did not know was that Lewandowski would become such a reliable goalscorer and general contributor to Bayern's attack that some have made the argument that the Pole is the best striker in the history of the club. This would put him above Gerd Muller, the legend of the 1960s and 1970s.

Lewandowski's consistency, coupled with his professional attitude and slim list of injuries, made him very reliable. On average, Lewandowski played 47 games for Bayern per season. Managers did not have to worry about the position up front, because he was usually available and rarely out of form.

On top of that, Lewandowski's versatility allowed him to easily adapt to new managers. He functioned equally well under Pep Guardiola, Carlo Ancelotti, Hansi Flick and Julian Nagelsmann. While some of his team-mates forced Bayern's coaches to make tactical adjustments, they never had to worry about Lewandowski - nor did they have to worry about any disruptive noises.

Other than a legal battle with his former agent and business partner Cezary Kucharski, Lewandowski never made the news with anything other than his on-pitch performances. Up until recently, he had acted like a true model professional.

The relationship between Lewandowski and Bayern was not one-sided. During the past eight years, he evolved from a high-energy transition striker into a much more considerate number nine who has learned to understand positional play and use smart off-the-ball movement, while also refining his technical skills in tight spaces. Lewandowski became the total package at Bayern, cancelling out any kind of weakness.

In a sense, he turned into a robot-like striker which fit his general persona. Fans never took their goalscorer to their hearts despite his contributions to Bayern's success.

Lewandowski himself also never hid the fact that money was his main driver. When he extended his contract in 2019, he stated that Bayern were the right club for him at that particular time. There was no oath for eternal allegiance.

With that in mind, the recent departure from Munich was not totally unexpected. After all, it might not tarnish Lewandowski's legacy too much because he was never meant to become a fan favourite.

Instead, Lewandowski has and always will primarily be seen as a businessman looking out for his own career.

This news item was provided by the BBC Sport - Football website - the original link is: https://www.bbc.co.uk/sport/football/62189936?at_medium=RSS&at_campaign=KARANGA