A stoppage-time header from Michael Ihiekwe helped Rotherham get their Championship campaign off to a perfect start with a 1-0 win at fellow promoted side Wycombe.

The home team had wasted the best chances of the match, with Daryl Horgan shooting over from close range and Darius Charles hitting the crossbar, but Ihiekwe's late header saw Rotherham mark their return to the Championship after a one-year absence with three points.

Wycombe's starting line-up for their first match in the second tier featured eight players from their League One play-off final victory two months ago, but it was new signing Horgan who should have opened the scoring as early as the second minute. 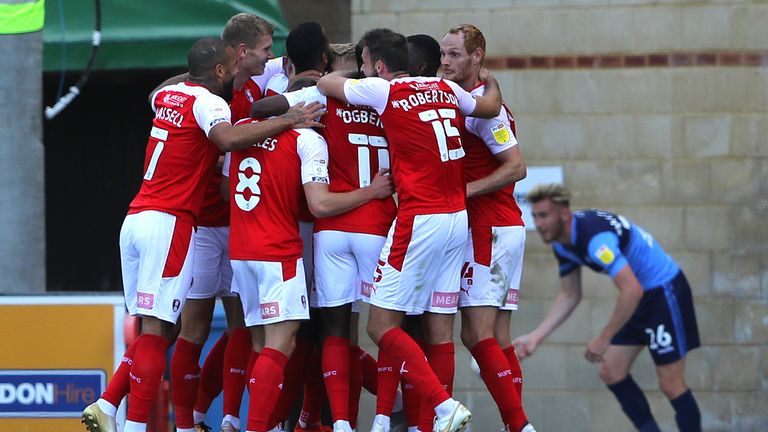 A long ball over the top found Scott Kashket, who squared to Horgan inside the six-yard box. The former Hibernian man was unmarked but was always stretching and could only put the ball over the bar.

Joe Jacobson was Wycombe's top scorer in League One last season and almost turned provider on the half-hour mark.

Kashket had looked dangerous early on and after he was fouled on the left, Jacobson swung a free-kick into the box which fell to Charles, who turned and stuck out a foot only to see his effort cannon back off the underside of the bar.

The ball was cleared as far as Alex Pattison and his low drive was kept out by former Wycombe loanee Jamal Blackman in the Rotherham goal.

Rotherham had chances of their own, with a Kieran Sadlier free-kick touched round the post by Chairboys keeper Ryan Allsop and Ihiekwe heading inches wide from a Joe Mattock free-kick.

The end-to-end style of play continued in the second half but neither side was able to establish any clear periods of dominance, with veteran midfielder Matt Bloomfield volleying wide for Wycombe on the hour.

With 20 minutes to go, Kashket again found himself with a chance after latching on to a neat flick from David Wheeler. He lobbed Blackman, only to see the ball cleared off the line by Wes Harding.

Both sides made late attacking changes, with Kyle Vassell on for Rotherham and Nick Freeman for Wycombe as they sought a dramatic winner.

Rotherham looked the most likely to snatch victory, with two long shots from Vassell signalling their intent.

In the end it was Ihiekwe, making up for his earlier missed chance, who rose highest to meet a Mattock corner to break both the deadlock and Wycombe hearts.

This news item was provided by the SkySports | News website - the original link is: https://www.skysports.com/football/wycombe-vs-rotherham/report/429716