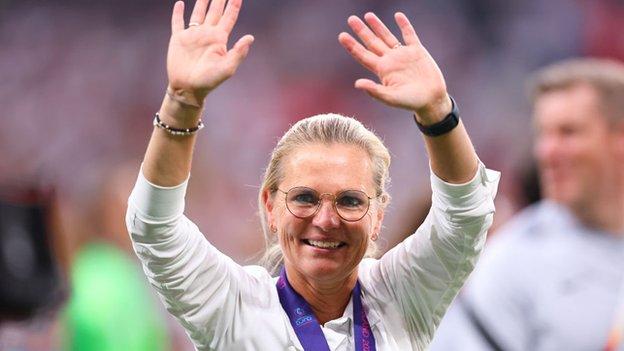 England are to open talks with Euro 2022-winning manager Sarina Wiegman over a new contract.

The Football Association is keen to extend a deal that runs until 2025.

Dutchwoman Wiegman only took on the job last September but led England to their first women's major trophy on Sunday.

"She will have a couple of weeks off. When she gets back, we'll have a conversation," said Baroness Sue Campbell, the FA's head of women's football.

"She needs a holiday. She's done an incredible job. You have to remember she only came in in September.

"Everybody said to me, 'do you think she can win the Euros?' and I said, 'it's a very short time span that.' But my goodness, she has moulded the team together. Not just the players, the team around her.

"There's a togetherness. You have to be in it to feel it. When we interviewed her, we knew we were getting the best tactical and technical coach in the world. What we didn't know was that we were getting this exceptional human being."

FA chief executive Mark Bullingham said Wiegman was their "number one target" last year and he hopes she is with England for "a long time".

"We were delighted to secure her, even though in our wildest dreams, we thought that this tournament might be too early," said Bullingham.

"We weren't sure we'd win this one. We were hoping we would win one in the future, so she achieved brilliant results earlier than we could have ever hoped.

This news item was provided by the BBC Sport - Football website - the original link is: https://www.bbc.co.uk/sport/football/62381663?at_medium=RSS&at_campaign=KARANGA