Sarina Wiegman: The player, the manager, the person 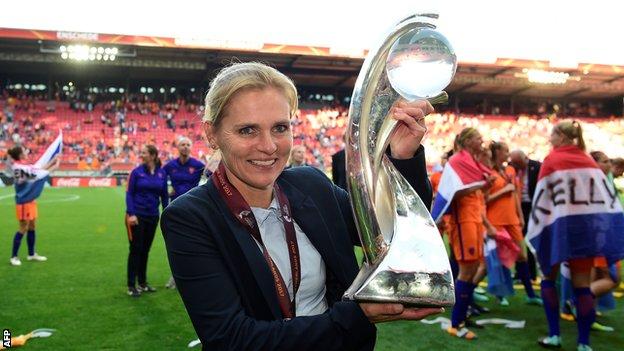 Sarina Wiegman guided the Netherlands to their first major trophy at Euro 2017, and to a World Cup final two years later

When England take to the pitch at Wembley on Sunday for the Euro 2022 final with Germany, they do so knowing they have at the helm someone who has only ever experienced the winning feeling as a manager in the competition.

Sarina Wiegman is attempting to do something no coach has ever done before - win the Women's European Championship with two different countries.

The Dutchwoman, 52, who masterminded the Netherlands' triumph on home soil at Euro 2017, is also looking to become the first foreign coach to claim the crown.

Here, BBC Sport speaks to some of the players and coaches she has worked with over the years to get an insight into the woman attempting to lead the Lionesses to their first major title.

It was on the streets of the Hague that Wiegman first discovered football, playing alongside her twin brother as there were no girls-only teams. She was called up by the Netherlands for the first time in 1986, aged 16, and later moved to the US for a year to study and play football at the University of North Carolina (UNC). 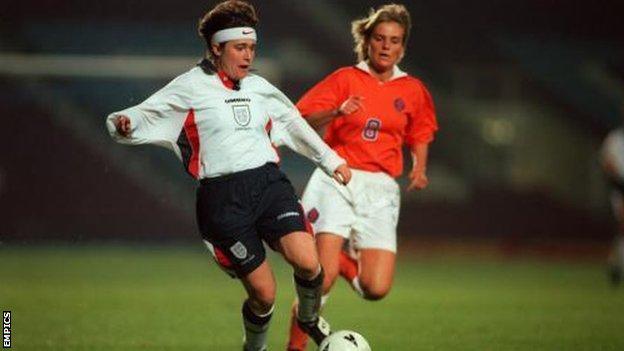 Lilly - the most-capped player in the history of the sport, making 354 appearances for the United States - has fond memories of sharing her freshman year with the Dutchwoman.

"I can picture her smile - there were always some laughs going on," she says. "She was nice, friendly, and a very crafty midfielder, so I loved having her on my team. She worked hard.

"As a player she had this little feistiness, competitiveness about her, that I think as a coach you wouldn't see as much, because you have to be on an even keel. But as a player, I can see her game face, and it was tense when she played. I loved that." 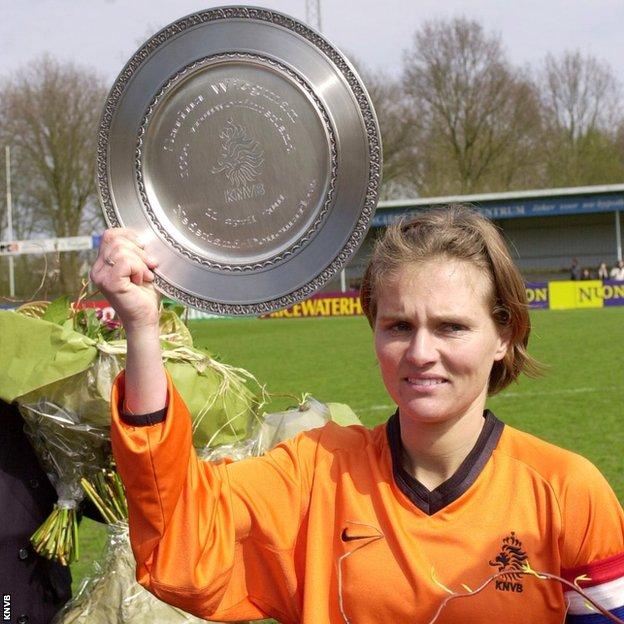 Wiegman became the first Dutch player to make 100 appearances for her country, finishing with 104

Wiegman has spoken of being anxious as she embarked on that first trip to the US - saying she was completely out of her comfort zone - but any nerves weren't apparent to those looking on.

"I don't think it was a daunting experience for her," says Anson Dorrance, who ran the women's soccer programme at UNC.

"She was already a Dutch international, travelling all the time. She didn't appear in the least to be self-conscious or paranoid or afraid. She appeared wonderfully well-adjusted.

"We embraced her immediately. All we could see was an immediate adjustment to the American culture. The Dutch would be called the Americans of Europe - a swashbuckling nation, very frank and direct. She fitted right in."

Wiegman combined her playing career with teaching PE, then started football coaching when she retired as a player. When the Women's Eredivisie was created in 2007 she landed her first full-time job as a coach at ADO Den Haag, having initially turned it down when it was offered on a semi-professional basis. 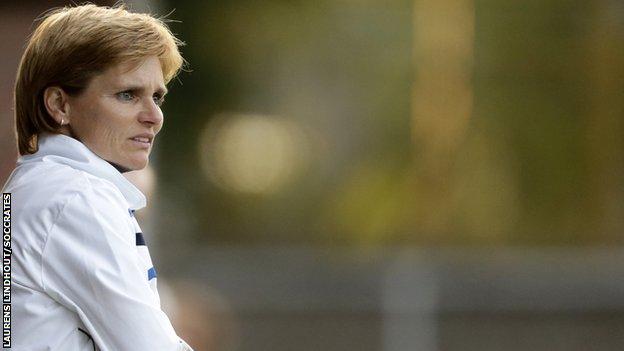 Former Netherlands international Leonne Stentler was one of the players Wiegman took to ADO Den Haag in her first season there.

"I didn't know what to expect but she was really warm, so I felt totally welcomed," says Stentler. "The way she welcomed me and the way she talked about how she wanted to do it was warm but really ambitious."

Stentler recalls an unusual rule early in her time there that meant nobody in the team was allowed to take a drink of water by themselves - it had to be done together.

"At first she was a hard coach with a lot of rules, and during the first year she made so many changes and worked on herself," she says.

Stentler recalls: "Sometimes I looked at her and she couldn't understand why people were dancing and laughing - she was like: 'You should be concentrating and focusing on the game… this is going to be a disaster.'

"She had to learn that that was the preparation for that specific character."

Wiegman spent seven years at the club, but Stentler says those first few months were the biggest learning period for the future England coach.

"She let us find out what rules worked for us but she would make sure the frames were really clear," she said. "Inside those frames, we were totally free to do things that worked for us."

After seven years at Den Haag, Wiegman became assistant coach of the Netherlands national team. She also wanted to keep developing as a coach, so became one of a handful of Dutchwomen to earn the Uefa Pro Licence. 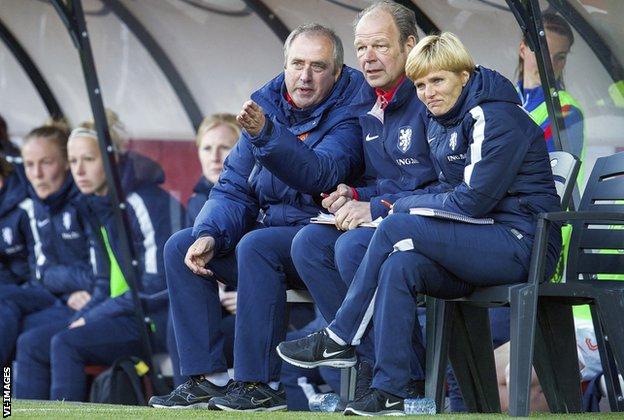 As part of the requirements of her Pro Licence course, Wiegman needed to do an internship. She wrote to Sparta Rotterdam head coach Alex Pastoor, asking if she could do some coaching at his club - a men's team in the Dutch second tier.

Pastoor says Wiegman - the first female coach on his team - was "so serious" about her work.

"She had the experience of playing herself," he says. "The tactical things, we all discussed together. She took part in it and saw the same things we saw.

"As a coach, you need to have a certain leadership and authority, and this was something she had when she was leading parts of the training."

When the season finished, Pastoor asked Wiegman to return as assistant to the under-23 team, making her the first female coach in Dutch professional football. That was cut short, however, when the national team required more of her time.

But Pastoor has no doubt she would have flourished whichever route she chose.

"I honestly think if she would coach at a professional men's football team in Holland, she would succeed," he says.

Wiegman twice stepped up as interim head coach of the Netherlands before taking the job permanently in January 2017. She won the Euros seven months later, and led the team to the World Cup final in 2019. She took over as England manager in September 2021. 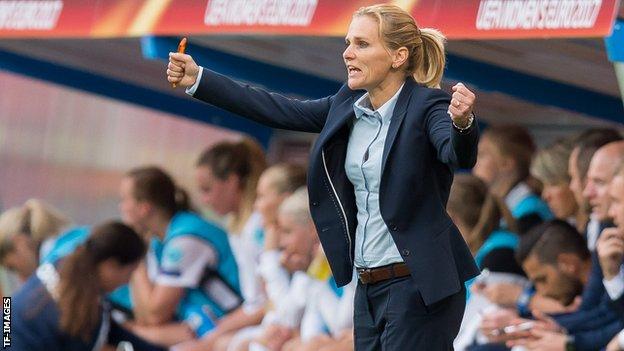 If Wiegman felt the England squad needed bringing together after her arrival, she also knew just how to do it.

Lionesses goalkeeper Hannah Hampton recalls her turning one room at the team's training base into a "massive fire pit with beanbags, hot chocolate, the lot".

In that homely environment, the players were encouraged to share their stories and create bonds with their team-mates.

"I think from then it changed everyone's attitude and the atmosphere changed... you definitely feel closer to one another and we've definitely all looked out for each other.

"We are just a massive family."

But if bringing a championship-winning mentality to the England squad in just 10 months before a home Euros seems like a tough ask, Wiegman had even less time - six months - when in charge of her home nation.

Taking over a Dutch squad low in morale, and because of her association with the previous regime, she had to win over the players and her new staff. That included vastly experienced coach Foppe de Haan, who was brought in to assist Wiegman.

Despite De Haan being older and more experienced, Wiegman was comfortable in the leadership role.

"She knows what she wants", says De Haan."But she was also open and keen to hear other people's ideas."

Trying to get her to switch off during that first tournament was more difficult, though.

There were stressful moments during the Euros - like being level with Denmark at half-time in the final - but De Haan says one of Wiegman's strengths is "she is always calm, she never panics". 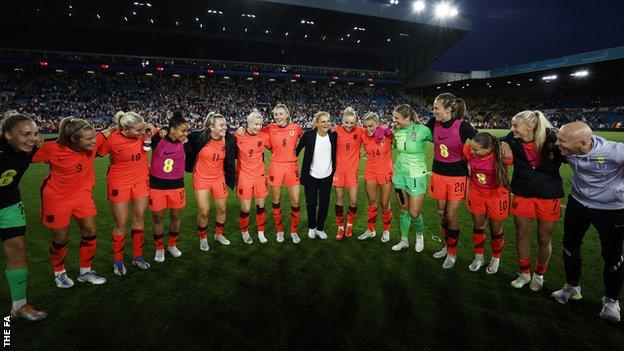 Under Sarina Wiegman, England have beaten Germany and European champions the Netherlands, and drawn with highly-rated Spain and Olympic champions Canada

Calm, clear and direct are words that crop up regularly when people are asked to describe Wiegman.

Indeed when Wiegman was appointed, Netherlands striker Vivianne Miedema said England were getting "a really clear coach" who "knows how she wants to play".

Her new charges have been similarly impressed.

Striker Beth England describes her as a "very good people person" but adds: "She tells us when things aren't right; and she's not shy to be savage and brutal when she needs to be."

"She takes all the emotion out and it's never a comment to me directly as a person, more as a footballer and what's best for the team," says Bright.

"She's built a collective - not just among the players, but the team around the players - which is very, very special. I've not seen anything like it in all my time in sport.

"She is a quite remarkable leader and a very special person."

Wiegman was born in the Hague, in 1969, and is married to Marten Glotzbach, a youth football coach, with whom she has two daughters.

Dorrance, Wiegman's university coach, says one of his most striking memories of the Dutchwoman came a few years after she had left the US.

His US team had won the World Cup in 1991 and he was invited to give a talk to a group of Dutch coaches in Zeist - the training centre for the national team.

He says he presented his philosophy - technical testing to show how skilful a player is - but the concept did not go down well among his audience.

"All I can remember from that Zeist experience is poor Sarina basically absorbing the blows with me, and I could see the consternation on her face," he says.

"To some extent she was embarrassed about the way I was treated. I've never forgotten that. I still have a wonderful picture of her compassionate face looking up at me, just hoping that her colleagues would give me a break."

For Stentler, that human side sets Wiegman apart from other coaches she worked with during her career.

"She really feels what players need - and makes sure you feel warm and welcome and open to say anything to her. If I was in a really bad situation, I could tell her without any consequences. And that feeling of openness is not very common in coaches.

"I definitely had moments where I was not happy with Sarina but when I look back at my career she was the best coach, the best human, in my career."

A version of this feature was first published before the start of Euro 2022.

This news item was provided by the BBC Sport - Football website - the original link is: https://www.bbc.co.uk/sport/football/62016998?at_medium=RSS&at_campaign=KARANGA

CategoryPremier League
Why Arsenal could be the club to sign Raphinha this summer
Nicole Billa: Austria’s lethal striker who could spoil England party