Scotland v Ukraine: Steve Clarke sure his side won’t be ‘one-tournament wonders’ 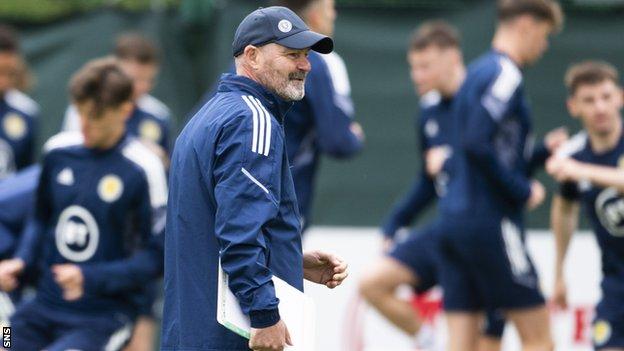 Steve Clarke is sure this Scotland squad will not be "one-tournament wonders" as they prepare to face Ukraine in their World Cup play-off.

Clarke led his side to the delayed Euro 2020 - their first major tournament finals in 23 years.

Beat Ukraine on Wednesday and they will travel to Wales on Sunday, with the winner there qualifying for Qatar 2022.

"This team, this squad of players, will go to another tournament," the Scotland head coach said.

"We said we didn't want to be one-tournament wonders. I'm convinced that this group of players won't be, whether it's this tournament 2022 in Qatar or 2024 in Germany or 2026 in America."

The play-off semi-final at Hampden Park was delayed from March following Russia's invasion of Ukraine and Clarke is expecting an emotional night in Glasgow.

"They made a decision to get their football players out the country and to a training camp because they want to play and want to try to give their nation a boost by qualifying for Qatar," he says.

"The game goes ahead amid the horrific outside influence, but for us, we focus on the game of football.

"How you would deal with yourself if you were put in that situation, you don't know until you're actually there, but I've nothing but good thoughts for them and good wishes for them - except for during the game."

Former Scotland midfielder Graeme Souness has said he not only wants Ukraine to win at Hampden but to go on to lift the World Cup as a message to Russia.

"Everyone has their opinion on the situation and every opinion will be different," Clarke responds.

"Before the game, there will be a lot of emotion around the Ukraine and I'm sure the Tartan Army will applaud their national anthem and then sing their hearts out and get behind the team and it's really important for us that they do that."

Clarke fully expects Ukraine to be ready for the match despite the war raging at home, with their players having spent the past few weeks training together.

"I said a long time ago that I hoped the game would go ahead in June because, if it did, the situation there would have improved," he adds.

"It hasn't, but we're still here and we always said we'd be guided by the Ukrainians and how they felt."

This news item was provided by the BBC Sport - Football website - the original link is: https://www.bbc.co.uk/sport/football/61649259?at_medium=RSS&at_campaign=KARANGA