Josh Windass scored one and made another for Jordan Rhodes as Sheffield Wednesday started the new Championship season with a 2-0 win at Cardiff.

Windass opened the scoring early in the first half and Rhodes added a second in the 44th minute as Garry Monk's men produced a backs-to-the-wall display.

Wednesday had started the new season on minus 12 points after the club were found to have breached the English Football League's profitability and sustainability regulations.

Cardiff had a similarly troubled build-up after they sacked winger Nathaniel Mendez-Laing earlier this week in mysterious circumstances for what the club termed a breach of contract.

Neil Harris' Bluebirds paid the price for some sloppy defending and a lack of creativity even though they were more dominant in possession.

Monk's side put their points deduction behind them to move ahead in just the fourth minute. Cardiff's Leandro Bacuna gave away possession in midfield and Wednesday struck.

Izzy Brown played in Windass and the striker did brilliantly to race in on goal and finish smartly despite the presence of two covering Cardiff defenders. 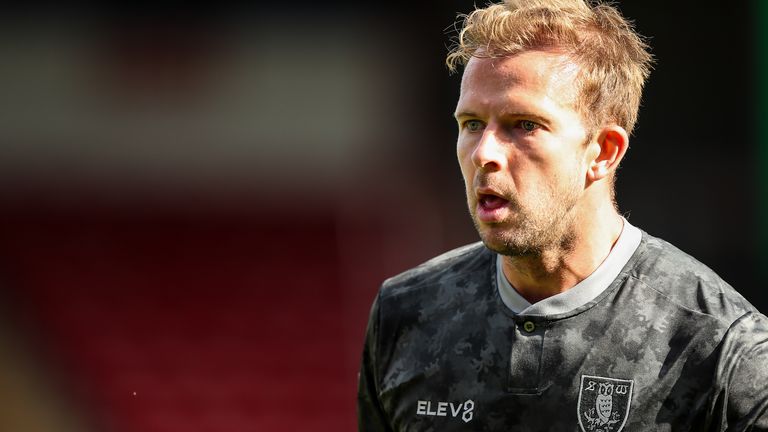 Junior Hoilett had a shot blocked at the other end while Liverpool loanee Sheyi Ojo dragged an inviting ball across the six-yard box on his Cardiff debut and Will Vaulks had a shot saved.

Sean Morrison also headed a corner wide as Cardiff dominated the ball but failed to break down a resolute Wednesday defence.

Windass came close to a second when he forced Alex Smithies into an acrobatic save, but Wednesday did double their advantage before the break.

Barry Bannan's free-kick was flicked on by Windass and strike-partner Rhodes couldn't miss.

Kieffer Moore had gone close with the last action of the first half for Cardiff, who had 72 per cent of the possession, but they lacked fluency in midfield and a clear attacking threat.

Winger Josh Murphy and striker Robert Glatzel were introduced from the bench in the 58th minute and Lee Tomlin soon followed them in entering the fray.

Monk also replaced both his scorers but Cardiff's attacking substitutions couldn't make a difference as Wednesday stayed resolute and organised.

Away substitute Elias Kachunga had a weak header saved and then saw Morrison block another effort but Wednesday never looked like letting their lead slip.

Harris will know he has work to do as last season's play-off side are capable of much better than this.

Cardiff's Neil Harris: "It's fair to say it's been a challenging week. It was not a good start at all. We gave away possession for the first goal and for the second to lose the first, second and third contacts isn't good enough. We didn't show enough quality in the final third to get back into the game. We were architects of our own downfall and in the Championship you get punished. Both goals were really poor.

"If there is a hangover we need to shake it off quickly but I don't sense it at the moment. We need to be more fluent and make better decisions in the final third."

Sheffield Wednesday's Garry Monk: We had desire and organisation. We took our chances well and the boys defended superbly. Unity and spirit is key to giving ourselves the best chance. The message at the end to ourselves and to the fans was that we are together and we are going to fight for the club and the shirt.

"But it's one game out of 46. We are not going to get ahead of ourselves. We need that kind of performance now in the other 45 matches. There will be setbacks along the way, but we're going to give it a real go. We need to recover well and do our preparation as we did here. We now have a cup game to look forward to."

This news item was provided by the SkySports | News website - the original link is: https://www.skysports.com/football/cardiff-vs-sheff-wed/report/429709