Should football clubs travel so far for pre-season? 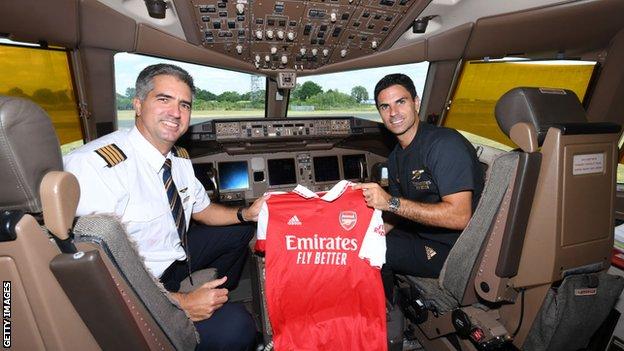 The Premier League's unrivalled global appeal has seen sold-out stadiums across the world this summer - with fans spread across various continents getting to see their heroes in real life.

After two years of Covid-restricted travel, most clubs in the English top flight chose to play matches overseas on money-spinning tours, while some opted for more low-key training camps abroad.

But after calls for sport to use the pandemic as a chance to reset around its role in climate impact, the return to vast amounts of plane travel has raised questions on the cost to the environment.

This table displays a BBC Sport estimate of each club's emissions in order of who has generated the most CO2 from air travel.

BBC Sport has not included emissions from domestic fixtures for the purposes of this comparison, given air travel - mile for mile - is the most damaging way to travel for the environment.

The club to produce the most CO2 during their pre-season tour was Aston Villa.

In total, Villa have emitted 87.63 metric tonnes of CO2, equating to 2,921kg per passenger, from five flights this summer - with the longest journey from the UK to Brisbane.

Leeds, who travelled to Australia to play Brisbane Roar, Villa and Crystal Palace, were second highest. Their tour resulted in the Yorkshire club emitting 82.08 metric tonnes over four flights, which is the equivalent of 15.8 times the average UK citizen's annual emissions.

Forest Green Rovers owner Dale Vince told the BBC that his League One club had an annual footprint of just 70 tonnes last year, meaning it would take them almost a decade to generate the equivalent emissions.

Some clubs appearing at the bottom of our table, such as Brighton and Bournemouth, flew to Europe for training camps and low-key friendlies.

Brighton's chief operating officer Paul Mullen told BBC Sport that sustainability was "not a major consideration" in their pre-season plans, but added the club was in the "very early stages" of developing a strategy "to be a sustainable business".

Mullen told BBC Sport that many clubs will have overseas tours built into commercial agreements designed to "further extend the brand" in global markets.

He said: "I think there's an expectation to be a good citizen, to be a leader in this and show good practice where we can but, at the same time, recognising our business does also pose certain challenges.

"We realise it's a collective responsibility. The Premier League is developing its own sustainability strategy and I suspect from that will come a strategy whereby clubs entering the Premier League have certain minimum commitments that they have to adhere as part of that obligation.

"I think the football is always going to be the driving force in terms of the business and we have to realise that and the environment that we're operating in, but I think we can align and integrate, improving our sustainability and green credentials through that."

BBC Sport contacted several clubs for comment as they plan and deliver their own pre-season tours, rather than the Premier League.

The league - which is signed up to the UN Sports for Climate Action Framework - has a sustainability strategy which includes sharing best practice with its clubs.

"Flying to distant countries for pre-season friendly matches surely isn't about preparation for the upcoming season, but is about extending the reach of the brand and increasing the fan base, and hence revenue, in these countries.

"It is interesting that just six clubs made up two-thirds of the total CO2 emissions. Two of these clubs were tied as equal top of the Sport Positive Sustainability League in 2021 and so recognised for the good work they are doing at their own venues.

"Air travel is often demonised; its impacts are significant and we, as a society, should fly less. It is more complex than simply condemning all flying, but clubs should understand that the credibility of their sustainability claims will be judged on their most visible behaviours and actions.

"Football, in particular, has significant influence over which behaviours are accepted and which are not.

"Ultimately the decision to undertake a tour in a distant country should comply with the vision and values of the club itself and whether, as the impacts of the climate and ecological emergency continue to increase, it fits with the attitudes and expectations of the public and the club's own fans."

Why do clubs fly so much?

The Climate Change Committee, the UK government's advisor on the issue, has called for an urgent plan to reduce the amount of flights.

Manchester United, another of the clubs with the highest emissions this summer, said it "recognises the impact of international travel on climate change" and had offset its carbon emissions by investing in a reforestation project in Western Australia.

Carbon offsetting has its critics because it doesn't help reduce emissions; while the reforestation project United are investing in becomes more effective only when the trees reach maturity.

A spokesperson acknowledged to BBC Sport that "you could argue that all travel is avoidable", but added pre-season tours "provide vital preparation time for players and management ahead of a new season".

They added: "In addition they are an important commercial opportunity, not just for Manchester United but the wider appeal of English football.

"This is why for the first full pre-season tour since the start of the pandemic we have offset the carbon emissions generated by air travel.

"We understand that this does not have an instant impact on the environment but we are committed to taking necessary steps to lessen our carbon footprint. We also believe if we continue to promote this work we can educate others and help protect our planet."

Premier League clubs lost a total of £1bn in revenue during the 2019-20 season and across Europe's top-flight clubs, losses for the two years impacted by covid between 2019-2021 were put at 7bn euros (£5.83bn) by Uefa president Aleksander Ceferin.

These losses were from empty stadiums, a reshaped calendar, TV rebates and commercial and sponsorship reductions.

In addition, supporters who may not be able to travel to England to see their clubs in action had the opportunity to attend matches.

The United spokesperson added: "Manchester United are a globally-supported football club and, while providing the opportunity for our millions of fans worldwide to see the team in person, we also recognise the need to do this responsibly."

This news item was provided by the BBC Sport - Football website - the original link is: https://www.bbc.co.uk/sport/football/62280394?at_medium=RSS&at_campaign=KARANGA