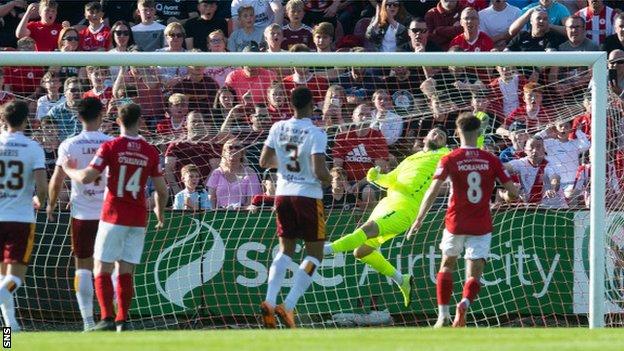 Motherwell were outclassed by an inspired Sligo Rovers as the hapless Scots were deservedly dumped out of Europa Conference League qualifying.

Already a goal up from last week's first leg, Shane Blaney's early rocket of a free-kick gave the Irish hosts a commanding hold of the tie.

In truth, it was never in question against a Scottish Premiership side bereft of creativity and nous.

They were jeered by an irate travelling support at full-time while the Sligo fans jubilantly celebrated the prospect of a meeting with Norwegian outfit Viking in the third round.

A much improved performance from last week at Fir Park was mandatory for Motherwell if they were going to overturn the aggregate scoreline. A worse start couldn't have been sketched.

With just four minutes on the clock, Blaney deceived the Motherwell goalkeeper with a surging shot into the far top corner to extend Rovers' lead.

Motherwell looked to have replied promptly when Ricki Lamie volleyed in from close range, but screams of relief rather than joy were sharply shut down by the assistant's flag.

Graham Alexander's side failed to truly test Luke McNicholas in the Sligo Rovers goal before the interval, with the lack of chances created startling.

In turn it was Kelly who was forced to remain alert. Fancy footwork from Niall Morahan found Keena, but his strike lacked venom as it flew straight at the Motherwell keeper.

After the break Sligo remained energetic, creative and confident. Motherwell were lacklustre, sterile and messy.

Down the left, Will Fitzgerald spun Paul McGinn into a daze. Showing inside and out, he teed up the unmarked David Cawley but the execution was off target.

Alexander rolled the dice on Joe Efford and Sean Goss. The link-up between the two was the most inspired over the 90 minutes, but even so, Efford's eventual effort when a rare chance fell his way looped just over.

Already outfought and undone, things were to get even worse for the Scottish side in stoppage time.

Mata - who should have scored in Lanarkshire - made no mistake when the ball dropped to him. The first touch was to control, the second was to send Motherwell convincingly out of Europe before their league season even begins.

Sligo manager John Russell: "It's a massive moment. I spoke about it to the players before the game - this was a chance to make history.

"We had to be solid defensively and limit Motherwell. To start the game with that free-kick is a wonderful moment. We were disciplined and put on a good performance. We've got to keep producing shocks."

Motherwell manager Graham Alexander: "We didn't compete at the level we needed to win the game. We gave away a really poor goal and it put us on the back foot.

"It was just the perfect start for them, the worst start for us. Any momentum we got going at any time was nullified by Sligo. We didn't have that killer instinct or the will to beat our opponent in the box."

This news item was provided by the BBC Sport - Football website - the original link is: https://www.bbc.co.uk/sport/football/62287268?at_medium=RSS&at_campaign=KARANGA