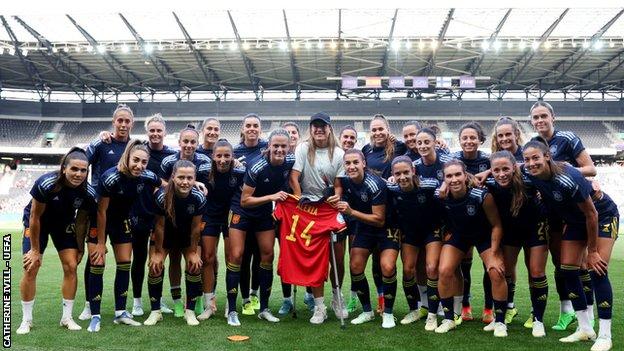 Spain dedicated their 4-1 victory over Finland to injured midfielder Alexia Putellas as they began their Euro 2022 campaign in convincing style.

Ballon d'Or holder Putellas, 28, is not expected to play again in 2022 after rupturing her anterior cruciate ligament in her left knee on Tuesday.

But she was at Stadium MK on crutches and helped inspire her team-mates.

"She was in the dressing room with us, motivated us with what she said and pushed us on," said Aitana Bonmati.

"I think Alexia wanted to enjoy the Euros. She has been really unlucky, she wanted to support us and be part of this moment.

"We prepared for this tournament over many years and sometimes things happen that you don't expect. It was important for us to have her here."

Midfielder Bonmati, one of seven Barcelona players to start the Group B match in Milton Keynes, ran over to celebrate with her Barca team-mate Putellas after scoring the second of Spain's four goals. 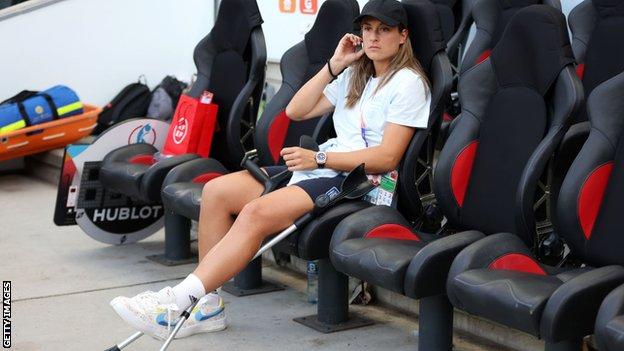 Spain had fallen behind after only 50 seconds thanks to a goal from Linda Sallstrom, before captain Irene Paredes, Bonmati and Lucia Garcia all scored with headers, and Mariona Caldentey converted a penalty in second-half injury time.

"We had to turn the game around and I can't remember the last time we had to stage a comeback after conceding such an early goal," said Spain head coach Jorge Vilda.

"We fell behind and managed to score four goals. The goals were dedicated to Alexia - that [team spirit] is a big strength of ours."

Putellas' injury was the second major blow in Spain's preparation for a tournament in which they are the bookmakers' favourites to win.

Record goalscorer Jennifer Hermoso also suffered a knee injury in June and had to withdraw from the squad, although Bonmati was not using the absence of two key players as an excuse.

"Of course they are two big losses and we're going to miss them as they are two of the best players in the world," added Bonmati.

"They have lots of international experience but sometimes when you're faced with difficulty there are opportunities for others.

"It's an opportunity to become more of a team then ever so we can go forward. When there are difficulties you become stronger and better players as you have to take more responsibility."

Spain had reached the quarter-finals in both the past two tournaments and face Germany at the Brentford Community Stadium on Tuesday and then end the group phase against Denmark, again in London.

Finland head coach Anna Signuel, the former Scotland boss, was impressed with Spain and thought they would take some stopping.

"I think we played a really good game but Spain, as we were expecting, were fantastic," said Signuel.

"Compared to the Spain of five years ago, they've improved a lot and they have so many quality players.

"Of course they will miss Putellas and Hermoso but did well with the players that came on."

The game at Stadium MK was watched by a crowd of 16,819, the 11th highest attendance in the competition's history and highest for a group phase match when a host team was not playing.

"It was a fantastic atmosphere," added Signuel. "The players were on the verge of crying when they came out and saw all the fans, it was amazing."

This news item was provided by the BBC Sport - Football website - the original link is: https://www.bbc.co.uk/sport/football/62101662?at_medium=RSS&at_campaign=KARANGA