Sweden will need an "extremely good plan" when they face hosts England in the Euro 2022 semi-finals, says manager Peter Gerhardsson.

Linda Sembrant scored a dramatic 92nd-minute winner to break Belgium's hearts and book a semi-final date with the Lionesses at a sold-out Bramall Lane in Sheffield next Tuesday.

"It will be an interesting game. I think we are very difficult to beat," added Gerhardsson after his side's narrow win over the Red Flames at Leigh Sports Village.

"We need to ask ourselves 'what can we do to stop them [England] from playing well and what are our opportunities to beat them?'

Sweden, the top-ranked side at Euro 2022, had 33 attempts against Belgium but struggled to convert their chances into goals until Sembrant struck from close range in the dying moments.

Stina Blackstenius had a goal ruled out for offside before being denied by a fine Nicky Evrard save, and it looked as though the quarter-final was heading for extra time when Sembrant struck from inside the six-yard box.

While Belgium's players looked shattered at the final whistle, Sweden celebrated wildly in front of their jubilant fans in the 7,517 crowd.

On this evidence, however, Sarina Wiegman's Lionesses will not be too concerned about what awaits them next week. While Sweden scored five in their previous game against Portugal, they spurned chance after chance before eventually edging through.

The expectation before kick-off was that the Swedes would join Wiegman's side in Sheffield, but they made hard work of seeing off a Belgium side appearing in the quarter-finals for the first time. 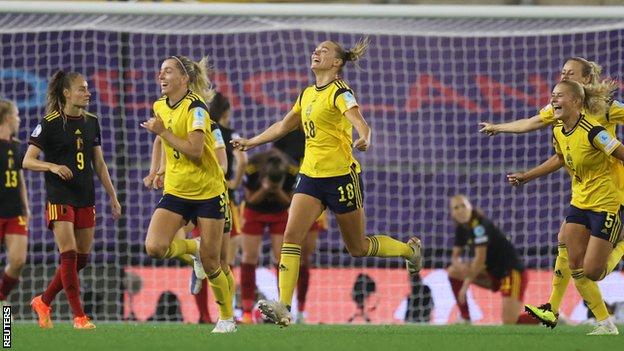 Sweden are former winners of the European Women's Championship

Sweden started on the front foot against a team 17 places below them in the world rankings.

Manchester City's Filippa Angeldahl twice went close in the early stages before Blackstenius produced a composed finish after being sent clean through.

Her celebrations, however, were cut short after a Video Assistant Referee (VAR) check ruled she had strayed narrowly offside.

It was not all one-way traffic. Justine Vanhaevermaet, scorer of Belgium's first goal at Euro 2022, went close with a fierce attempt before Sweden eventually got the job done.

This was hard to take for Belgium, who were watched by Belgium men's boss Roberto Martinez.

But the team ranked 19th in the world will take satisfaction from making Sweden work so hard for their victory.

Their players looked close to tears at the end but there are positives for the future.

"At this moment it is hard for us," said Belgium boss Ives Serneels. "We must be proud that we were here to play this wonderful game against Sweden.

"It must give us a lot of experience for the future. Now the players know what can happen when you work hard for something."

This news item was provided by the BBC Sport - Football website - the original link is: https://www.bbc.co.uk/sport/football/62241465?at_medium=RSS&at_campaign=KARANGA