Ruthless Sweden marched into the quarter-finals of Euro 2022 after scoring three times in the first half to end Portugal's interest in the tournament.

The team ranked second in the world proved too strong for their opponents and will return to Leigh Sports Village next Friday to face Iceland, Belgium or Italy.

Manchester City's Filippa Angeldal fired her side into the lead after a weak clearance by Portugal keeper Patricia Morais, who was making her first appearance at the tournament.

Angeldal doubled the lead with a first-time shot following another set-piece, and it was 3-0 deep into first-half stoppage time when Carole Costa headed into her own net from a corner.

Kosovare Asllani made it 4-0 from the penalty spot before Stina Blackstenius, who had two goals ruled out earlier, added the fifth as Sweden produced a statement win going into the knockout stage.

"We had a plan to get more set-pieces and we were very strong," said Sweden boss Peter Gerhardsson. "We are very strong and it is difficult to play against us.

"I think the third match was a factor that worked to our advantage. It meant Portugal didn't have as much time to organise properly to attack us. I'm happy that we won the game and also that we won 5-0 to win the group."

It was one game too far for Portugal, who lost to Russia in the play-offs only to secure a place in the tournament after Russia were expelled following the country's invasion of Ukraine.

But while the second-lowest ranked team at Euro 2022 exit with one point from three games, Sweden march on after their biggest win in England this summer.

Sweden had started the day behind defending champions the Netherlands, with whom they had played out a draw in their opening game. But although the Dutch beat Switzerland to finish level on seven points, the Swedes' hammering of Portugal meant they topped Group C on goal difference.

The runners-up at last year's Olympics had followed that opening draw by edging past Switzerland 2-1.

But this victory was every bit as comprehensive as the score suggests as Portugal, who saw Catarina Amado carried off on a stretcher in the first half, suffered in the baking heat.

"I think we started well but on set-pieces we did not compete," Portugal boss Francisco Neto said. "At this level everything counts and it was very hard for us to stop the set-pieces of Sweden." 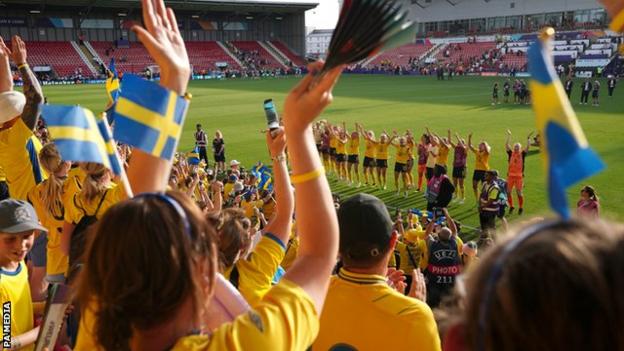 The Swedes had been dealt a blow before the match when long-serving midfielder Caroline Seger was not deemed fit enough to start.

It was the first time she had missed a match at the European Women's Championship since 2005.

But Sweden overcame her absence to produce an impressive performance that suggests they mean serious business, and they celebrated a fine victory at full-time in front of their jubilant travelling fans.

"For sure Sweden can get the trophy. They are very strong," added Neto.

This news item was provided by the BBC Sport - Football website - the original link is: https://www.bbc.co.uk/sport/football/62192401?at_medium=RSS&at_campaign=KARANGA