The rise of fantasy football and how it changed the game 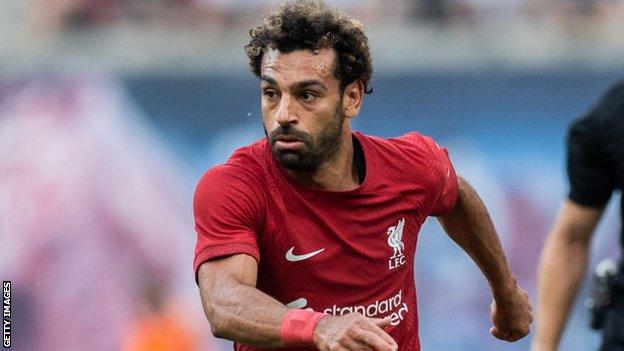 A £100m transfer budget. The opportunity to combine the likes of Erling Haaland, Mohamed Salah and Harry Kane in one line-up. The ability to make weekly changes to your squad.

It would be a dream for many Premier League managers - but it creates some rather difficult decisions for those why ply their trade in the world of fantasy football.

"I considered watching the final day hiding behind my couch, but I decided to meet up with some local FPL players from Twitter and my family at a bar.

"While I would have enjoyed a summer break from the Premier League, it's been exciting - but also exhausting. I'm definitely feeling a little pressure with people actually following how I do this season."

Pigott beat more than nine million players to triumph in only his second season in the official Premier League game last season.

By now, even those who have never played a version of the game themselves probably know about it.

"I remember, maybe 15 years ago, on the BBC website, someone made a reference to having a player in their fantasy football team and the person running the live page made a comment saying 'does anyone actually still play fantasy football?'," said Mark Sutherns, founder of the website Fantasy Football Scout.

"You couldn't make that comment now. It's amazing how it has gone from something you're almost ashamed of, a hobby which you would keep to yourself, to something people openly discuss. For some it's how they earn a living. It's fantastic to see the growth.

"Football coverage has moved on and it is now more acceptable to be into the analytics side of the game. It feeds an audience that wants to know more and fantasy football keys right into that." 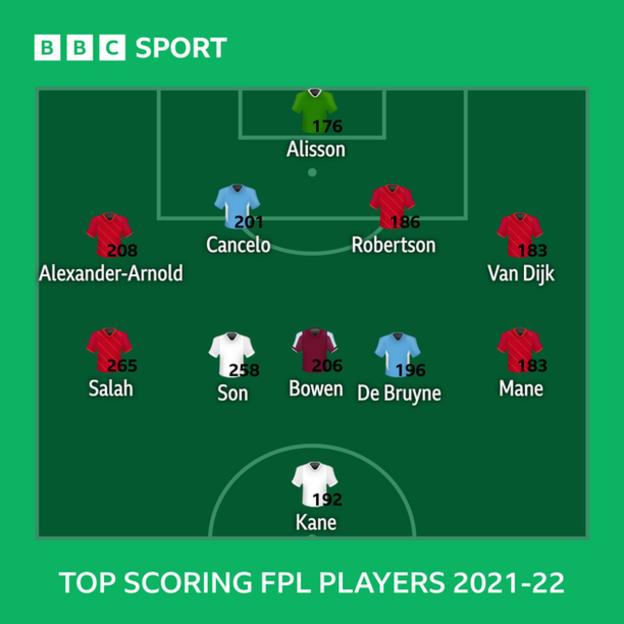 Sutherns, who admits he has always had an interest in the "nerdier side of football", decided to start a blog offering fantasy football insight after playing the game with work colleagues. He hoped he might reach a couple of hundred readers.

It was not long before the demand for the website's content had far exceeded his expectations.

"I caught this wave of growth. As Scout grew bigger it became more than a hobby, it became a business for me. I got involved with writing for the Premier League and it just snowballed," said Sutherns.

"Football never stops and I turned fantasy football into something that never stops."

Sutherns has since stepped away from the website but continues to share his expertise on his YouTube channel - as well as bringing managers together through 'Fantasy Football Fest' meet-ups.

"I am quite proud of the fact the community has grown the way it has. I was perhaps a pioneer for that - but I don't envy content creators now. I know how consuming it can be," he added.

The desire to get the edge on the competition, whether competing for overall supremacy or mini-league honours against friends and colleagues, has driven a surge in demand for insight.

Indeed, one player even created a bot which resulted in real team news being leaked.

Among the most popular accounts on Twitter is that of Ben Crellin, who creates spreadsheets which help players plan for future transfers and the blank and double gameweeks that inevitably arise because of fixture clashes.

"I'm probably one of the most-followed individuals in the FPL community and all I had was this little niche," Crellin said.

"It's crazy. I started off with about 300 followers in 2016 and I am up to over 200,000 now. It's a bit strange that I'm followed by this many people for such a small aspect of FPL but the whole community has grown a lot." 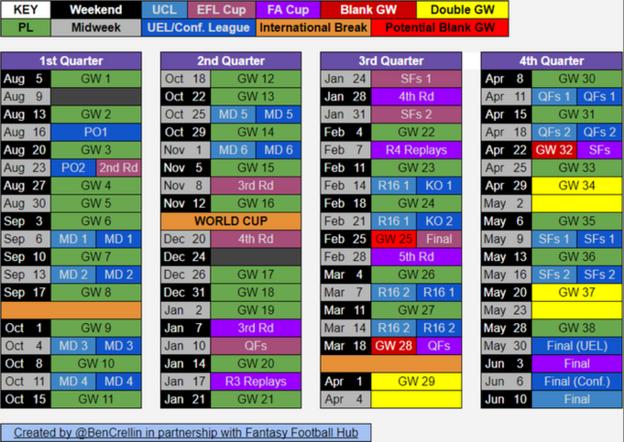 Ben Crellin began making his spreadsheets five years ago, as the introduction of the bench boost, free hit and triple captain chips made planning for double gameweeks more important

"There are particular times over the season, for example when the FA Cup gets going, that I get so many interactions and notifications, it's a bit overwhelming," Crellin said.

"The last couple of seasons have been very difficult. At one stage last year around 30 matches needed to be rescheduled and it was almost impossible to make an accurate prediction of how they were going to fall.

"But I find it very rewarding and I feel grateful to have this position in the community."

The 2022-23 campaign features the unique complication of a mid-season World Cup - though with a break scheduled between November and December, Crellin believes this campaign will prove easier to navigate.

Right up until the first deadline, before Arsenal visit Crystal Palace in the season-opener on 5 August, managers around the world will be making last-minute tweaks in the hope of assembling a winning 15-man squad.

In his title-winning campaign, Pigott engaged more with content such as podcasts during his spare time and, in addition to his own observations while watching matches, often made decisions based on statistics such as expected goals (xG) and expected assists (xA).

So, what advice can he offer to players before the new campaign?

"Plan ahead, don't panic and be patient," said Pigott. "At the same time, adapt to what you see - don't be too stubborn if a player you thought was going to be good doesn't perform.

"One of the big things I learned last year is you don't have to get everything right to win FPL. There were times when I captained the wrong player, transferred in players who didn't do anything, and even transferred out someone who got a hat-trick the next week.

"Don't be discouraged by a bad week or a bad decision. They happen. Play your own game and have fun with it."

According to the experienced Sutherns, anyone new to the game should look to keep things simple.

"Don't be afraid to go for the obvious," he said.

"Salah is the best player in the game and he probably will be for a few seasons to come. Someone like me might go without Salah to try something new, but leave the experimentation to people like me.

"If you're new to the game, concentrate on some of the most assured assets, which will be the likes of Salah, Son Heung-min and Haaland."

This news item was provided by the BBC Sport - Football website - the original link is: https://www.bbc.co.uk/sport/football/62143882?at_medium=RSS&at_campaign=KARANGA