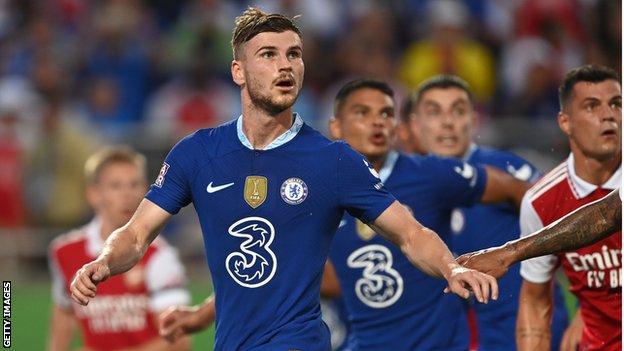 Chelsea have held talks with RB Leipzig about forward Timo Werner returning to the Bundesliga club on loan.

The German international, 26, left Leipzig to join Chelsea in 2020 but has struggled to make his mark, scoring 10 goals in 56 Premier League appearances.

Chelsea have bolstered their attack with Raheem Sterling joining from Manchester City last month although Romelu Lukaku has left on loan.

However, Werner's salary could be an obstacle in the way of any move.

For a loan move to proceed, he may need to take a pay cut or have Chelsea cover at least part of his wages.

During Chelsea's pre-season tour of the United States, Werner hinted he could be happy elsewhere.

But manager Tuchel reacted to those comments, by saying: "I would be one of the happiest people on the planet having a contract with Chelsea."

Newcastle are also interested in signing Werner, but his salary could prove too high for the Magpies to negotiate a deal.

Eddie Howe's side are looking to recruit two more attacking players and have already made two bids to try and sign Leicester and England attacking midfielder James Maddison, with the latest at more than 40m.

This news item was provided by the BBC Sport - Football website - the original link is: https://www.bbc.co.uk/sport/football/62394984?at_medium=RSS&at_campaign=KARANGA