Chelsea's bid to sign Ben Chilwell from Leicester City in a £50m deal could collapse on Monday, with the 23-year-old England defender set to visit a specialist over his heel injury. (Sun)

Manchester United will walk away from a deal for 20-year-old England forward Jadon Sancho, with Ed Woodward considering the Borussia Dortmund star to be too expensive. (Express)

Chelsea are closing in on a deal to sign Thiago Silva, 35, after the Brazil centre-back left Champions League runners-up Paris St-Germain. (Sky Sports)

Lille's Brazilian centre-back Gabriel Magalhaes, 22, has agreed to join Arsenal and will complete a £27m move next week. (Guardian)

Bournemouth will not stand in the way of any players seeking moves - potentially opening the door for Manchester United to sign Wales winger David Brooks, 23. (Mail)

Koeman would also like Brazil playmaker Coutinho to be part of his plans - the 28-year-old has been on loan at Bayern Munich this season. (Mundo Deportivo - in Spanish)

Luis Figo does not expect Argentina forward Lionel Messi, 33, to follow in his footsteps by swapping Barcelona for Real Madrid. (Marca)

Swedish forward Zlatan Ibrahimovic, 38, has yet to sign a new contract with AC Milan. The veteran will be a free agent after the end of August. (Gazzetta dello Sport - in Italian) 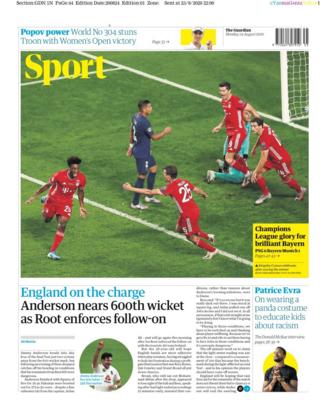 This news item was provided by the BBC Sport - Football website - the original link is: http://www.bbc.co.uk/sport/53882362