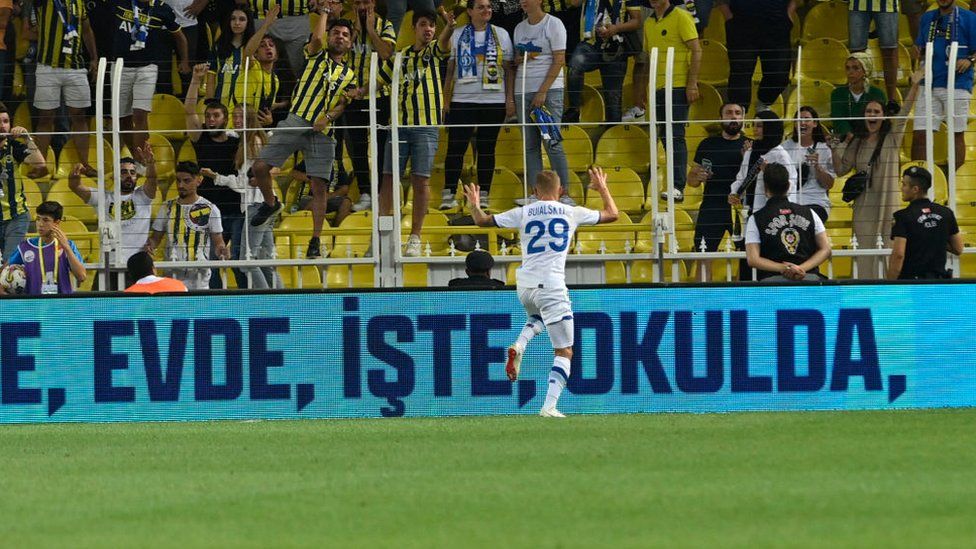 Vitaliy Buyalskyi's celebration, which seemed to imitate the logo of Fenerbahce's arch-rivals Besiktas, appeared to spark the chants

Thousands of Fenerbahce supporters joined in the chant after their team conceded a goal to Ukrainian champions Dynamo Kyiv.

Dynamo Kyiv won the match 2-1, having drawn 0-0 in the first leg played in Poland because of Russia's invasion.

"We will never understand the words of support for the Russian killer and aggressor who deliberately kills Ukrainians and destroys our country," Mr Bodnar wrote on Facebook. "Even football, which is so loved in Turkey, has its limits."

Competition organiser Uefa told the BBC that it has opened an investigation into the incident.

The chants appeared to have been sparked after Dynamo midfielder Vitaliy Buyalskyi celebrated giving his side the lead by making an eagle gesture with hands, which some fans believed to be a nod to Fenerbahce's arch-rivals Besiktas.

Dynamo's head coach Mircea Lucescu told reporters after the game that the sport "cannot accept the behaviour of the fans".

"I did not expect such chants. It is a pity," he added. Lucescu, a former manager of the Turkish national team, later refused to attend a post-match news conference in protest over the fans' actions.

Fenerbahce said the fans' actions did not represent the club or its "corporate stance in any way".

"We once again remind the public of our stance that sports and politics should always be kept separate from each other," a statement read.

The incident sparked uproar on social media, with some users saying the Turkish side should be banned from European competitions.

It comes just weeks before the return of the top flight of Ukrainian football on 23 August. The Ukrainian Premier League was abandoned after the Russian invasion in February, which made it unsafe to continue.

"Holding football competitions during the war is not only about sports," Andriy Pavelko, president of the Ukrainian FA, told reporters.

The exact format of the competition is yet to be confirmed, but it is expected that games will be played behind closed doors in the Kyiv region and other cities further west.

Just two sides from last season's incomplete schedule, Desna Chernihiv and FC Mariupol, have announced that they will not be able to take part. Both sides have seen their infrastructure devastated, with Mariupol currently under Russian occupation after a protracted siege.

Ukrainian footballer Oleksandr Zinchenko talks about the war in his homeland

This news item was provided by the BBC Sport - Football website - the original link is: https://www.bbc.co.uk/news/world-europe-62332847?at_medium=RSS&at_campaign=KARANGA