Ukraine’s World Cup dream is about much more than football, says Andriy Shevchenko 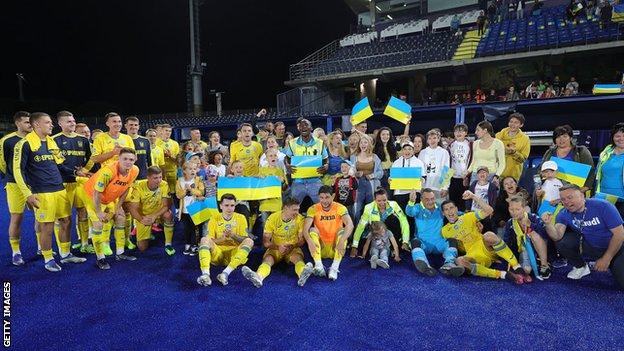 Ukraine have played a series of friendly matches to prepare for the Scotland game, including this one against Empoli on 12 May

Ukraine are bidding to reach a second World Cup since independence in 1991.

"The Scotland match is the hope of the country," the former Chelsea striker, who managed the national team at Euro 2020, told BBC Sport.

"Going to the World Cup is very important for Ukraine right now.

"The motivation is incredible. In my opinion, we need to put the result away and just focus on the game.

The winners of the game in Glasgow will face Wales in Cardiff on Sunday for a place at November's World Cup in Qatar.

"I know the stadium will be full and the Scottish fans, as well as those who will watch the game around the world - Ukrainians or not - will be cheering," said Shevchenko, who scored 48 goals in 111 appearances for his country.

"I believe we can win and then beat Wales to qualify for the World Cup. The players know what they have to do."

"There's no need to influence them or to say anything," he added. "They are experienced football players and understand everything perfectly well."

But preparations have been far from easy. The war has meant Ukraine's players have had to prepare for the game outside of their country.

Many of those based in Ukraine have been involved in a month-long training camp in Slovenia and have had little or no competitive action since football was halted by war just days before the domestic season was about to resume after a long winter break.

That training camp was only possible after players from Dynamo Kyiv and Shakhtar Donetsk were given special dispensation to leave the country and tour Europe for friendlies.

They have played against club sides in Germany, Italy and Croatia, but their fitness is still below the ideal standard for international football.

Events in Ukraine mean Scotland's opponents are likely to have plenty of neutral support during the play-offs, but the semi-final will also be followed closely by those on the front line of the war.

"I was in the hot-spots of this war," Fedetskyi told BBC Sport.

"Soldiers speak a lot about football there. They want our team to qualify for the World Cup - it's their dream."

He made sure the message reached West Ham's Andriy Yarmolenko and Manchester City's Oleksandr Zinchenko, two of the most prominent players in the Ukrainian squad. 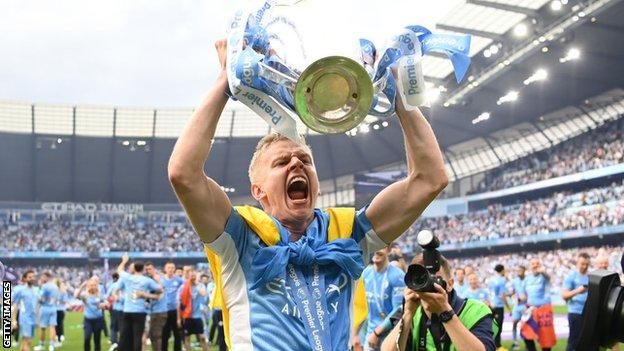 "I am constantly talking to both of them," he added. "They and those in the team understand the importance of this game. But nobody knows what's inside of each person and you can't train that."

Oleksandr Kucher played 57 times for Ukraine and is now manager of second-tier side Metalist Kharkiv.

"It's not enough to play friendlies, but at least it's something," he said.

"This team needs to offer hope in such times. I hope and I believe we'll go through and then play Wales at the weekend.

"Our players will leave everything they're made of on the pitch, I have no doubt." 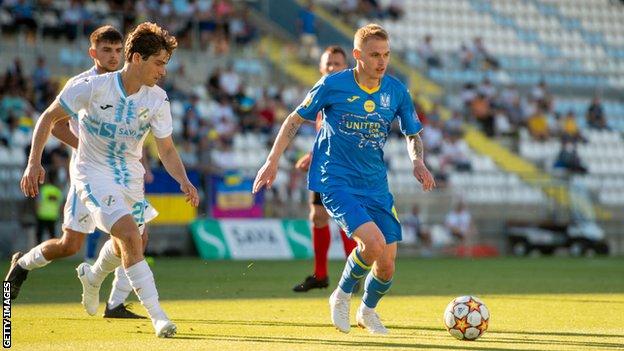 Even before the war Ukraine faced a daunting task to reach the World Cup, given Scotland's resurgence and the prospect of facing a Wales side in the final who are a dominant force on home soil.

But Fedetskyi believes manager Petrakov will have the ability to motivate his team despite the difficulties they have faced in the build-up.

"The coach is a good speaker," said Fedetskyi. "He'll know what to tell the boys, he'll find the right words.

"Petrakov will create fighters, just like our heroes are at home. They will beat this cursed aggressor in the war.

"And the national team will have a tough match because Scotland are strong. But I believe in our leaders. They are ready."

This news item was provided by the BBC Sport - Football website - the original link is: https://www.bbc.co.uk/sport/football/61647628?at_medium=RSS&at_campaign=KARANGA