Vote: Who are the best club side of all time? Barcelona? Man Utd? Liverpool?

English football has been dominated by two fantastic club sides over the past few seasons - Manchester City and Liverpool.

Both sides fell just short of historic seasons though. With a week to go Liverpool were chasing an unprecedented quadruple but, after their 1-0 Champions League defeat by Real Madrid, they end with just the Carabao Cup and FA Cup.

Although City won their fourth Premier League title in five years - beating Liverpool by a point - that was their only silverware of the season.

That got us thinking about the game's greatest club sides of all time. We have profiled 10 legendary teams - with only one great side from each club - and you can vote for the best at the bottom. If you select 'other', let us know which side you would have picked in the comments. 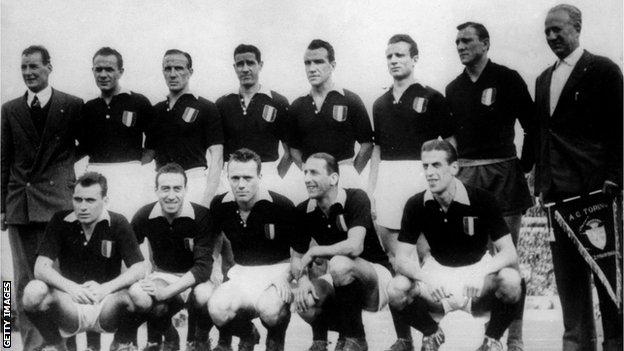 Torino may be known these days as Juventus' less illustrious neighbours, but in the 1940s they were the kings of Italian football, known as Il Grande Torino.

On 4 May 1949 they were on the verge of a fifth consecutive Italian title - either side of World War II and unbeaten at home in more than six years - until everything changed forever.

That day 31 people died in the Superga air disaster including 18 Torino players - practically their whole squad. 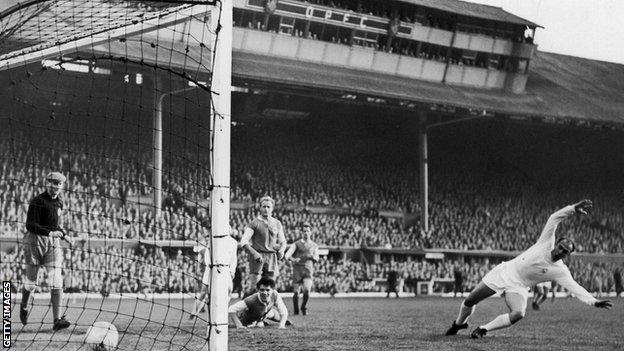 They won the first five tournaments from 1955-56 to 1959-60. Even today only AC Milan, Liverpool and Bayern Munich have won more than five European Cups or Champions Leagues.

Real also won 12 Spanish league titles between 1954 and 1969 - but it was a season they did not win La Liga that was considered one of their best.

In 1959-60 they scored 92 goals in 30 La Liga games to finish level on points with Barcelona, but lost on goal difference.

That was the year Alfredo di Stefano and Ferenc Puskas scored seven goals between them in the European Cup final as they beat Eintracht Frankfurt 7-3. 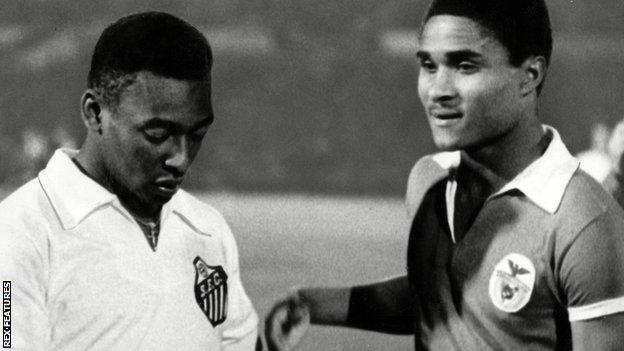 In 1963 they again won the national, continental and world competitions.

Santos also went on a run of 54 games unbeaten between November 1960 and October 1963, a world record at the time.

They could have won more trophies but did not enter the Copa Libertadores from 1965, instead travelling the world to play lucrative friendlies.

Only one European side has ever won the version of the quadruple that, up until the final minutes of the Premier League season, Liverpool were hoping to achieve - Celtic in 1966-67.

They won the Scottish league, Scottish Cup, Scottish League Cup and the European Cup (plus the Glasgow Cup to make it technically a quintuple) - scoring 196 goals.

Their 2-1 win over Inter Milan in Portugal made them the first British team to win the European Cup - leading to their nickname the Lisbon Lions.

Manager Jock Stein said: "Winning was important, but it was the way that we won that has filled me with satisfaction. We did it by playing football; pure, beautiful, inventive football. There was not a negative thought in our heads."

Famously all 11 players came from within 30 miles of Celtic Park, a feat unimaginable in today's game.

This season was during a run of nine consecutive league titles. 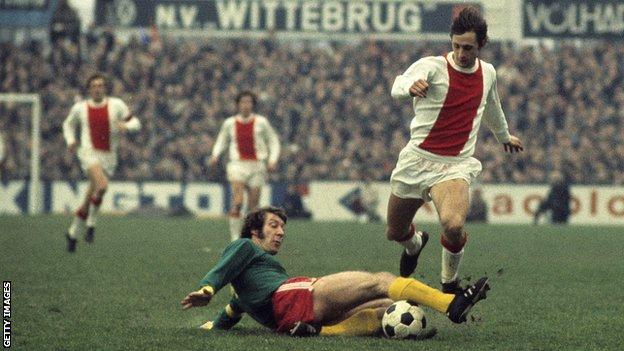 Johan Cruyff was the star of the Ajax team

Ajax won three European Cups in a row at the start of the 1970s at the height of their Total Football phase.

Their 1971-72 campaign will go down as one of the greats, winning the clean sweep of Dutch league, Cup and European Cup - including a record run of 26 wins in a row.

They won every home game in every competition, including a 12-1 thrashing of Vitesse on the final day, and beat Inter Milan 2-0 in the European Cup final.

The legendary Johan Cruyff was their top scorer with 33 goals. 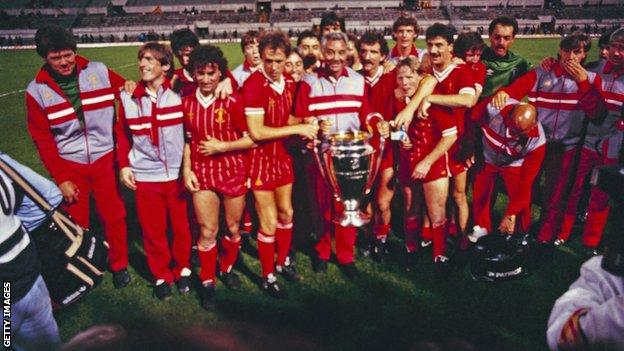 The current Liverpool team has a long way to go to match the dominance of their 1970s and 1980s sides.

The Reds also won four European Cups in eight years, ending in their 1983-84 treble of the European Cup, beating Roma on penalties in the final, First Division title and League Cup.

That was Joe Fagan's first season in charge having worked under the legendary Bill Shankly and Bob Paisley.

Ian Rush was their top scorer with 47 goals in all competitions. There was a big Scottish presence through the spine of their team with Alan Hansen, Graeme Souness and Kenny Dalglish all crucial players. 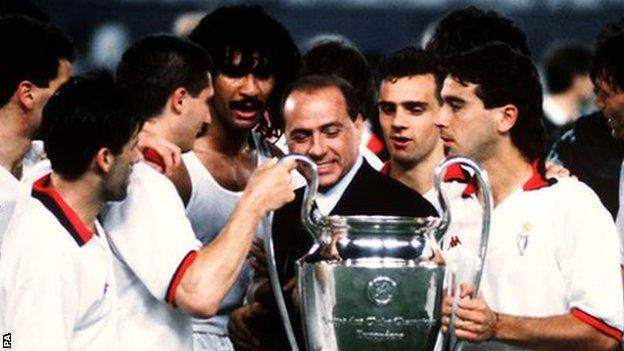 The AC Milan side built with the money of former Italian prime minister Silvio Berlusconi in the late 1980s would go on to become known as 'The Immortals' after collecting 10 major honours in nine years, including three European Cups.

Milan's 1988-89 season ended with them lifting the European Cup, albeit with help from the Belgrade fog in an earlier round.

They beat Steaua Bucharest 4-0 in the final - and defended the European Cup the following year.

In 1993-94 they went one better, winning the European Cup and Serie A - conceding only 15 goals in 34 games - but their team at the turn of the decade is considered their peak.

Manchester United were the dominant force in England from the advent of the Premier League in 1992 to the retirement of Sir Alex Ferguson in 2013.

But the pinnacle of that time was the Treble of Premier League, FA Cup and Champions League in 1998-99.

With a memorable midfield four of Ryan Giggs, Paul Scholes, Roy Keane and David Beckham and a front partnership of Andrew Cole and Dwight Yorke, United became the first English team to win the big three trophies in one season - even if their most iconic XI only played together twice.

All their trophies were close-run things. They won the Premier League title on the final day by one point and scored two goals in injury time to beat Bayern Munich in the Champions League final.

The dream almost ended a few weeks earlier when they were down to 10 men and faced a penalty at 1-1 in injury time in the FA Cup semi-final replay - but Peter Schmeichel saved from Arsenal's Dennis Bergkamp and Giggs went on to score one of the great FA Cup goals to send them to the final, where they beat Newcastle.

Barcelona were Europe's dominant force for about a decade in the 2000s and 2010s, but they reached another level during Pep Guardiola's four years in charge.

They won the Treble in 2008-09, but the 2010-11 team was arguably even better. Manchester United boss Ferguson said the 2011 vintage was "the best team I have faced" - with Barca beating his side in the Champions League final both times.

Lionel Messi led the way with 53 goals in front of the iconic midfield trio of Xavi, Andres Iniesta and Sergio Busquets.

Jupp Heynckes' Bayern won everything in 2012-13 before he handed the reins to Guardiola.

They started the season with the German Super Cup before adding the Bundesliga, German Cup and Champions League.

In the Bundesliga, Bayern are said to have broken or equalled 30 records that season, including most points, best goal difference, most wins, fewest losses and biggest margin of victory. They topped the table for all 34 weeks.

Thomas Muller was their top scorer in all competitions with 23, and Franck Ribery finished third in the 2013 Ballon d'Or.

This news item was provided by the BBC Sport - Football website - the original link is: https://www.bbc.co.uk/sport/football/61311898?at_medium=RSS&at_campaign=KARANGA