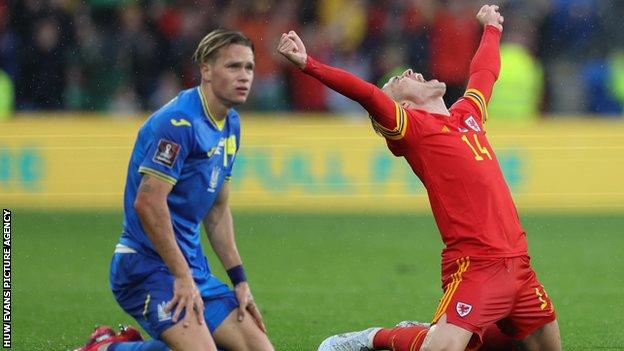 The agony and the ecstasy: Mykhailo Mudryk of Ukraine looks on as Wales' Connor Roberts celebrates

When you have waited 64 years for World Cup qualification, what are a few minutes?

Wales had just recorded what their captain Gareth Bale described as the "greatest result" in their history - but this was a unique situation, a generation-defining fixture with a difference.

It was remarkable that their opponents were even here. With war raging in their homeland following Russia's invasion, Ukraine's footballers had summoned a heroic effort to beat Scotland in their play-off semi-final and almost repeated the feat in Cardiff.

As their exhausted players wept in the rain after their 1-0 loss, you could not help but be moved.

After the initial euphoria of the final whistle, when Wales' players sank to their knees and looked to the skies, they rose to their feet and walked over to the corner of Ukraine fans before the home crowd had started their celebrations in earnest.

No supporter, in the red of Wales or Ukrainian blue and yellow, had left their seat. With consoling arms around their opponents' shoulders, Wales' players applauded Ukraine's fans, who returned the gesture.

The away end's thunderclap then made its way around the rest of the Cardiff City Stadium crowd, including those from Wales who had been taken to a higher plane by their team's historic achievement but were taking a moment to recognise their inspiring visitors.

"We just wanted to show our appreciation to them and what they're going through as a nation," said Wales manager Robert Page.

"I thought their team were outstanding in the two games and they deserve a lot of credit for what they've done, and their supporters as well. We wanted to show them that respect."

While the admiration for Ukraine was heartfelt, this was also an evening of seismic significance for Wales.

In the barren half-century which followed their only other appearance at a World Cup in 1958, Wales' relationship with the competition had come to be defined by agonising failure, often at the final hurdle.

And although this golden generation had qualified for back-to-back European Championships - and taken Wales to historic new heights with a first semi-final in 2016 - their absence from World Cups still represented a psychological barrier they needed to clear.

These players embraced this latest challenge and, unburdened by their nation's past, they overcame it. 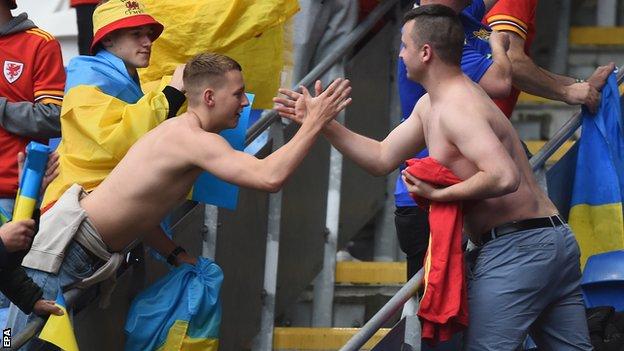 It feels fitting, therefore, that they have adopted 'Yma o Hyd', an iconic protest song about Welsh independence by folk great Dafydd Iwan, as a team anthem.

The chorus lyrics - 'Er gwaetha pawb a phopeth, ry'n ni yma o hyd' - translate as 'Despite everyone and everything, we are still here'. The song has come to symbolise the survival of Wales and the Welsh language through a long and turbulent history, in which they have been faced with numerous threats.

Iwan was reduced to tears after singing 'Yma o Hyd' at Cardiff City Stadium before March's World Cup play-off semi-final win over Austria, with a capacity crowd roaring his words back at him.

He was back again on Sunday, singing before kick-off and, this time, after the final whistle as well.

Wales' players huddled together on the halfway line to join in. The fact that only a handful of them speak Welsh did not matter - this is a song which binds them.

Bale, one of the majority who do not speak Welsh, was leading the way, swaying from side to side with his arms around his team-mates' shoulders as he belted out the words as if they belonged to the national anthem.

The man whose deflected free-kick settled this tie has been around long enough to remember some of Welsh football's bad old days. He was there when Wales were languishing outside the top 100 of the world rankings.

And as the protagonists of Wales' golden days - and these are the days - Bale and his team-mates can say with certainty and pride as they head to Qatar: "Ry'n ni yma o hyd. We are still here."

This news item was provided by the BBC Sport - Football website - the original link is: https://www.bbc.co.uk/sport/football/61700303?at_medium=RSS&at_campaign=KARANGA