From record-breaking spectator numbers to enormous viewing figures, the growth of women's football in England has been rapid in recent years.

The Lionesses' success on the pitch has fuelled a surge of interest in the sport and, while there remains room for improvement, the off-pitch progress over the past decade cannot be understated and is likely to culminate in a record crowd for a women's game in England when the hosts face Germany in the Euro 2022 final at Wembley on Sunday.

It was a moment described by BBC commentator Guy Mowbray as having the potential to take women's football "to a whole new level".

Nearly a decade ago, 70,584 spectators turned out at Wembley Stadium to watch Team GB beat tournament favourites Brazil 1-0 at the 2012 Olympics, becoming the largest ever crowd to watch a British women's international on home soil.

It beat the previous record for a women's match in England - set on Boxing Day 1920 at a game between Preston-based outfit Dick Kerr Ladies and St Helens Ladies at Goodison Park - by over 17,000.

The record lasted just over a week, with 80,203 turning out nine days later for the Olympic final to see the United States beat Japan at Wembley.

That remains the high for a women's match in England. The Lionesses' record crowd for a home international was broken in 2019 when 77,768 watched them lose 2-1 to Germany in a friendly at Wembley.

'In love with the Lionesses' 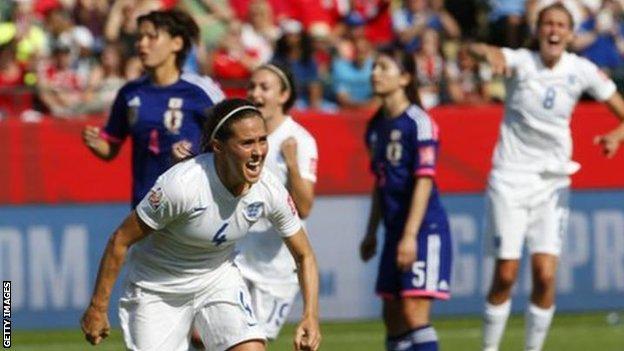 In 2015, Mark Sampson's side became the first England team to reach a World Cup semi-final since Italia 90 with a historic last-eight win over Canada in Vancouver.

Despite the 00:30 BST kick-off time, over 1.6m people tuned in to watch the victory, heralded by FA director of women's football Kelly Simmons as "the moment that the general public fell in love with the Lionesses".

Sampson's team lost out to eventual winners Japan in the last four, but in the third-place play-off England recorded a historic win over Germany through Fara Williams' extra-time penalty.

Off the pitch moves were already being made to maintain the growing momentum behind the women's game. The Female Development Programme, launched in 2013 and supposed to last two years, secured an additional year of joint FA and Sport England investment - in the region of £3.7m - to get thousands more women and girls involved in football.

The programme originally aimed to attract 40,000 new female players to take up football but exceeded that target by over 2,000 in its first two years.

By the time the FA's three-year 'Gameplan for Growth' strategy came to an end in 2020, over 3.4m female players were estimated to be involved in the game.

England's comprehensive semi-final victory over Sweden was watched by a peak television audience of 9.3 million on the BBC, but the record viewing figure for a Lionesses game was set three years ago.

A peak audience of over 11.7 million tuned in for their heartbreaking World Cup semi-final defeat by the USA in 2019, smashing all-time ratings records for the third time in the space of a fortnight.

Those remarkable numbers beat the combined digital and TV total of 11.3 million who watched the 2019 men's Champions League final between Tottenham and Liverpool in Madrid.

The previous women's record prior to the 2019 World Cup stood at four million viewers, set during the Lionesses' Euro 2017 last-four defeat by the Netherlands. 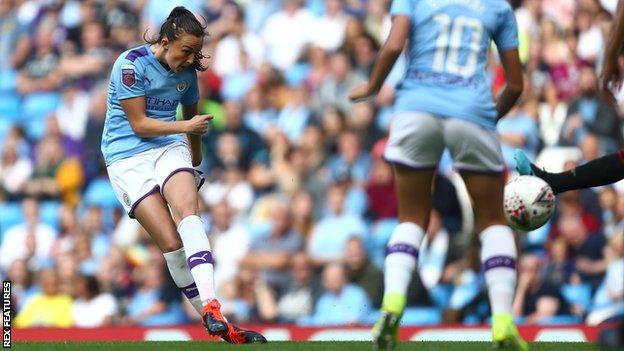 A record crowd watched the Manchester derby in September 2019

Aimed at building on the increased interest in the women's game following the 2019 World Cup, Manchester City and Chelsea made the decision to switch their opening 2019-20 Women's Super League fixtures to Etihad Stadium and Stamford Bridge respectively.

The first WSL Manchester derby at City's main stadium - which ended in a 1-0 victory to the hosts - was watched by a record-breaking 31,213, while 24,564 turned out the following day to watch Chelsea host London rivals Tottenham.

The WSL attendance record set on the opening day of the 2019-20 season was broken again in November that year, when 38,262 showed up for Spurs' 2-0 defeat by north London rivals Arsenal at Tottenham Hotspur Stadium - a WSL record that still stands today.

In March 2021, the FA announced a "landmark" three-year deal with BBC and Sky - believed to be the biggest of its kind in any professional women's football league around the world - for the broadcast rights to the WSL.

The £7m-£8m deal runs until 2024 and, according to Simmons, combines two of the FA's key priorities: increasing the league's visibility and attracting investment to further develop its quality.

"It is one of the biggest deals commercially, definitely for women's football in terms of a domestic deal, and up there for women's sport," Simmons said of the agreement, which contributed to a "near fourfold" increase in viewing hours in 2021-22 compared to the previous campaign.

"This is a moment to celebrate - a watershed moment in the WSL future," added the FA's commercial and marketing director Kathryn Swarbrick. "This is going to be a huge leap forward in achieving our ambition of having the world's best domestic women's professional league."

A taste of what is to come?

The Lionesses may not have produced the perfect, free-flowing performance they were hoping for in their Euro 2022 opener against Austria at Old Trafford, but they could hardly have wished for a better atmosphere at the Theatre of Dreams on 6 July.

A crowd of 68,871 - a record attendance for a European Women's Championship match - watched Sarina Wiegman's side get their campaign under way with a 1-0 victory, courtesy of Beth Mead's first-half strike.

Fans of both sides - including a large number of families - gathered outside the ground hours before kick-off, while the opening ceremony featured a spectacular pyrotechnics display. When Mead settled the home supporters' nerves with her chipped finish off the crossbar, bedlam ensued among the home faithful.

"It was incredible. No more words," Wiegman said when asked about the atmosphere, which set the tone for what has been a memorable tournament both on and off the pitch.

Sunday's final crowd could break the crowd record for any Euros match - men or women - with the current landmark standing at 79,115 for the 1964 men's final at Madrid's Bernabeu.

Tickets have sold out for Wembley, which has a capacity of 87,200 for the Euro 2022 showdown between England and Germany.

This news item was provided by the BBC Sport - Football website - the original link is: https://www.bbc.co.uk/sport/football/62280778?at_medium=RSS&at_campaign=KARANGA